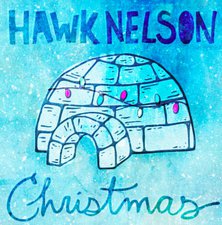 In 2006, Hawk Nelson left us with a snowy sprinkle of Christmas joy with Gloria EP. Five years later, they've kicked it up to seven tracks with their new release, Christmas. It's fast-paced, fun, and just what you would typically expect from this solid Canadian quartet.

They use their strongest asset to augment the mood immediately with "Hark the Herald Angels Sing." It's sheer, safe goodness, and an exceptional start. However, there's one major pro and one con that clash in the album. The pro: Hawk Nelson chose a rarer variety of songs than is typically elected for Christmas albums (with the exception of "Joy to the World" and "Silent Night"). I love this because it brings to life something that has been buried beneath snow and ash for so long. It can get repetitive listening to the same breed of Christmas songs, even if the artist is different. There's only so much that can be done to the composition. This isn't an issue for Christmas. The issue, for me, is its length. In short, four of the tracks are under two minutes long, while only one track is over three minutes. It feels rushed, despite its assortment.

"The Wassail Song" continues this quick-tempo holiday all through "Up on the Housetop," which is a definite highlight. This song  like "Hark"  captures the best that Hawk Nelson has to offer. In these two tracks, Jason Dunn utilizes his voice to create the ideal atmosphere to have a good time. It's raspy, fun, and infectious.

The album finally down-shifts gears on "The Holly and the Ivy." It's a deeper track about Mary's importance and the birth of Christ, "The holly bears a blossom, as white as lily flower. And Mary bore sweet Jesus, to be our Sweet Savior." "Joy to the World" is the weakest track on the album for several reasons. Naturally, it feels too much like a filler song. It's meant to be comical on its initial listen, but after that, it easily will become the song you'll find yourself skipping most often. Also, the fact that it's sung a capella only adds to its diminutive lasting appeal.

"I Saw Three Ships" is the last up-tempo song on the album, and does a decent job of keeping the ear drums bobbing without breaking any new ground. Christmas concludes with "Silent Night," a song that's been done and done and done again. It's extremely difficult to bring any freshness to a song like this without contributing to its droning echo over the years. Hawk Nelson, however, does a good job of adding their stamp to the song. It's a relaxing song that swells into a more climactic finish.

Looking back, Christmas will bring cheer to fans and new listeners alike, as I was in the latter group and enjoyed it. Whether it's worth purchasing may be up to you, but if you must buy only a couple of the tracks, I implore you to consider "Hark the Herald Angels Sing" and "Up on the Housetop." That being said, I'd say this album is a mixed bag of treats, some better than others, but is overall a decent addition to their resume.

Hawk Nelson follows up their 3-song holiday EP Gloria with a longer, 7-track effort in Christmas this season. It's a fast-and-furious collection of Christmas favorites that captures the fun and festive side of these pop punk boys from Canada. The band chose some familiar but less overdone Christmas favorites like "The Wassail Song" and "Up On The Housetop" and gave them their own fun spin, while they give a great celtic-punk-inspired take on "I Saw Three Ships." "Joy To The World" is a fun listen a couple times, but it's ultimately a disposable track that is a spoof on a caroling rendition of the song. Christmas flies by a bit too quickly to really leave much of a lasting impression; it's over about as fast as it begins. With this being the band's first major retail holiday effort, it may have worked best to tack on their two Happy Christmas contributions ("The Chipmunk Song (Christmas Don't Be Late)" and "Last Christmas," the latter of which was added to the digital release of Gloria) as well as the Gloria EP itself. With all twelve tracks, fans would have a more hearty thirty-minute holiday offering. Still, diehard fans will enjoy adding these seven tracks to their Christmas music rotation, while more casual fans may want to just pick and choose the tracks that tickle their holiday fancy the most instead. - John DiBiase, 11/1/11