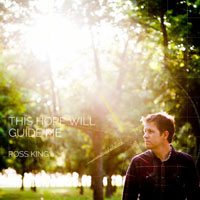 Ross King
This Hope Will Guide Me


Somewhere around the turn of the present millennium, Ross King was busy crafting songs like "Small Victories" ("We don't always like the taste of Living Water/ So we look around until we find a drink that we prefer") and "Clear the Stage" ("Tell your friends that this is where the party ends/ Until you're broken for your sins you can't be social/ Then seek the Lord and wait for what he has in store"). Both tracks were fairly representative of King's skill at crafting thought-provoking, often jarringly honest, snapshots of the less-than-admirable tendencies of those who made their home in the church pews each Sunday.

For better or worse, very little of that spit and vinegar is present on his project, This Hope Will Guide Me, which features a dozen polished pop cuts sure to delight those in the radio-loving crowd. Of course, as a singer/songwriter type, King has long been supplying artists in the Inspirational Top 40 with their material, and this, along with the fact that such innocuous soft worship-oriented fare has all but come to dominate the Christian music airwaves, has arguably had a hand in the tone of King's 2013 undertaking.

To his credit, King does manage to sink his teeth into the occasional irresistibly catchy melody line, as he does on numbers like "Sin Is Powerless." By and large, though, the album being given over to mostly run-of-the-mill pop/worship material that, pleasant though it is, fails to leave much of a lingering imprint. Those who found King's warts-and-all glimpses into the human condition a bit too brutally direct for their tastes will almost surely prefer this record. Listeners who appreciated the discerning, no-holds-barred aesthetic of early albums such as ... And All the Decorations, Too" on the other hand, will likely find his this project a pale shadow of those far more distinctive and engaging former works.