(NASHVILLE, Tenn.) Dec. 5, 2007Superchick will be spreading Christmas cheer this holiday season with its Rockin Around the Christmas Tree tour, visiting select markets this month. Kicking off Dec. 6, the tour will additionally feature artists KJ-52, Jimmy Needham, and Starlit Platoon.

Playing at churches and school auditoriums in Indiana, Ohio, Michigan, and Illinois, this is the first year Superchick has attempted such a tour. The evening of music will feature Christmas classics as well as Superchick hits. For a complete list of dates, visit: myspace.com/superchick. (and see below at the bottom of this report!)

Excitement is truly brewing for this tour, especially in this era when most Christmas tours are geared more toward the soccer mom generation, says Scott Huie, president of H20 Artist Agency. And believe me, this is not your mom and dads Christmas show, but one that truly connects with the younger generation.

KJ-52, a multi-Dove Award winning hip-hop artist, has toured with the likes of Kutless, Disciple, Falling Up, and Seventh Day Slumber, as well as performed at Acquire The Fire conferences and Dome Events. With seven albums to his credit, KJ has amassed more than 500,000 records sold to date. He has also twice been voted favorite Hip Hop Artist by readers of CCM Magazine. Currently, KJ-52 is a guest artist alongside Hawk Nelson and Natalie Grant on Women of Faiths Revolve Tour geared toward young women. For more information check out KJ-52s official artist website at www.kj52.com.

Houston, Texas-based, singer/songwriter Jimmy Needham first made a name for himself on the independent circuit with his soulful pop sound and passionate evangelical focus. Needhams Inpop Records debut, Speak, released Aug. 15, 2006 and showcased his down-to-earth lyrics while exposing the rock, pop and gospel-influenced side of his art as well. The album produced a No. 2 single at Christian Hit Radio with Lost At Sea, and its song Dearly Loved also broke the Top 10 on CHR. This fall Needham was featured on tour with NewSong, Echoing Angels and Nate Sallie. His sophomore album is due in stores spring 2008.Find out more about Jimmy Needham online at www.myspace.com/JimmyNeedham.

When Brandon Estelle isnt on the road playing sold out shows with mega-group Superchick, he can be found in the studio and behind a keyboard with his latest project Starlit Platoon. Formed in the summer of 2005 with long time friends Chase Lovelace (drums), Caleb George (bass), and Ray Darter (guitar), Starlit Platoon became an outlet of Estelles songwriting and soulful vocals. Today, Starlit Platoon is opening for other major acts, including Superchick, and headlining their own shows throughout the Midwest. For more information, visit: http://www.myspace.com/starlitplatoon.

Superchick will be spreading Christmas cheer this holiday season with its Rockin Around the Christmas Tree tour, as it kicks off this week! The tour will feature: Superchick, KJ-52, Jimmy Needham, and Starlit Platoon.

Get into the holiday spirit with tickets to this great tour! Cant wait to see you there! IT"S GONNA ROCK!!

**(SELECT DATES ONLY) - Wanna go backstage and meet the band?! Purchase your tickets IN ADVANCE for the dates below at www.iTickets.com and youll be entered into a drawing to win a meet and greet with Superchick! (Applies to dates below only) - All winners will be contacted prior to the show.

Best of luck and Happy Holidays! We look forward to seeing you on the road! 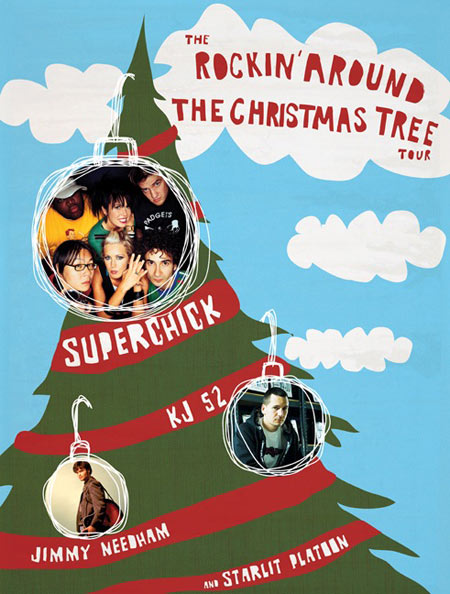