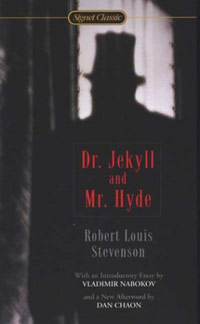 I suppose university makes one prone to read classics one would otherwise overlook in the run of everyday life. As an English student, I find myself very privileged to be exposed to these long-surviving tales when many other stories are unfortunately forgotten so quickly in today's world, where media and lightning-fast transmission rule. For the one with little time and a voracious appetite for good literature, Robert Louis Stevenson's novella The Strange Case of Dr. Jekyll and Mr. Hyde is the perfect pick.

The story begins as one would probably not expect; countless people have taken terrible liberties with poor Dr. Jekyll. Though he is the focus of the story, the tale is told primarily from the view of Jekyll's longtime friend, Mr. Utterson. This perspective gives the reader a far greater sense of suspension as the story unfolds. I find myself cynical of classics after a few run-ins with boring doldrums considered masterpieces. However, the more I delve into stories like Jekyll and Hyde, the more I have faith that not all classics are dull and equivalent to eating rocks coated with tinfoil. Stevenson is a master of suspense and kept me biting my lip as I read the unfolding of the story, even when I knew how it would turn out. Hyde is never portrayed as some mindless beast, as is his terrible misfortune at the hands of careless artists. On the contrary, Hyde is shown to be a sort of sympathetic figure, someone who cannot control himself despite every attempt to gain control. Utterson sees this firsthand in their final encounter, and the hair on my arm stood on end as I read it.

Stevenson draws his characters with an air I have difficulty finding fault in (which is rather annoying for someone who is an editor at heart). Poor Dr. Jekyll is the epitome of humanity, hopeless and addicted as he is to the very thing-the very person-he hates most: himself. And in a refreshing twist of cruel fate, the spiral in this book is never one that climbs. Henry Jekyll makes a steady and rapid descent into the pits of despair, much to his friend's sadness. The book ended much differently than I originally anticipated, and I savored being taken by surprise that Stevenson chose to illuminate the darker side of characters rather than settle for a veneer of the light.

The story may be taken as allegory, if that sort of thing is what you like to do. I myself am quite averse to allegory; however, I can see why some would draw the morals out of the novel and play them up. I would agree one-hundred percent that the entire story is a mass illustration-not a sermon, as allegory often is-of the destructive and voracious nature of human carnality. Jekyll often refers to his thirst of being free inside of Hyde's skin, his hunger to be able to be one person who can destroy while maintaining that other person who can live peacefully with others, albeit reclusively. The struggle is never played down, and in fact, I found the absolute tension at the end to be almost unbearable-not quite, but just about. I loved it.

Not every classic is an obnoxious marching band parading about its importance by way of other peoples' rave recommendations; Robert Louis Stevenson's The Strange Case of Dr. Jekyll and Mr. Hyde brings yet another banner of hope into this cynical heart, a banner that makes me think that classics I grew up snubbing may yet prove to change my mind about them. Much like Victor Hugo's stories, Stevenson observes, reveals, and calls out the dark to stand up and be accountable to not only itself and humanity, but to God as well. And I thank this book for that.