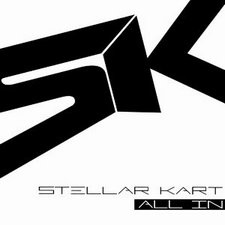 Stellar Kart
All In

Now this is more like it. Stellar Kart is one of those bands that's always seemed to be on the verge of their potential. Yet, for whatever reason, they've just never really gotten there. Maybe it's been lineup changes, or label issues, it's tough to say. They've certainly had their share of both recently. But it doesn't matter now because something feels different this time. It's not that their other albums were bad; actually, they were pretty enjoyable. But with All In, it seems like they've finally made it. With All In, Stellar Kart have finally arrived.

This is obvious from the very first song. "Criminals and Kings" is a lot edgier than anything they've ever done before, and it sets the stage for the rest of the album. With pounding drums and a blazing guitar line, the opening track proves to be the perfect initiation into the "new" Stellar Kart. Musically, the album feels more complex, while retaining the subtle simplicity the band is known for. Sure, the ballads are still here. Those are usually some of the best songs on every Stellar Kart album. The energy is here, too, however. But this time, the lyrics seem more mature, and the music more polished. Most of the time, bands seem to slow down the longer they're together, but thankfully, that's not the case here. If anything, Stellar Kart is speeding into the future.

But it's not just the musical progression of the band that makes All In so great. Lyrically, there's not a lot to complain about either. It just seems like the band has finally mastered the way of saying what they've always wanted to say. They still have fun doing it, but their message is clear, especially in the title track, "All In (Apologize)": "I am not ashamed, won't walk away Not trying to disguise, or ever hide the reason that I choose to be a fool for the One who saved my life, I won't apologize."

Sacrifice and love; it's what Christianity is all about. God loved us so much that He sent His only Son to die for us. In return, all we have to do is accept this undeserved gift. Out of love, we must follow Him at any cost -- always, not just when it's easy. This theme can be found throughout the album. On "Before and After," frontman Adam Agee sings that "there is nothing you could ever do, that could make me walk away from you, no. Before and after today, I love you the same." And it's such an important distinction, and such a powerful proclamation for the band to make. After everything they've been through, and after all these years, their foundation is still in Christ. That, above all, makes All In worth listening to.

Stellar Kart has set a new standard not only for themselves, but for pop rock in general. All In is the best record in Stellar Kart's catalog so far. It's hard to imagine the band going anywhere but up from here.