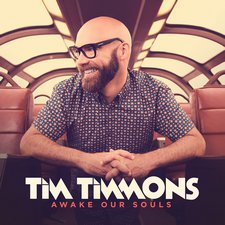 
Singer, songwriter, Tim Timmons jumped into the CCM scene with his debut album, Cast My Cares, in 2013. The album featured many deeply personal songs that dealt with struggles in Timmons' life -- especially given his terminal cancer diagnosis. While "Starts With Me" was a smash hit on CCM radio, songs like "Cast My Cares" and "Great Reward" resonated much greater. The announcement of his newest album, Awake Our Souls, was quite exciting for this reviewer. Another collection of songs featuring Timmons' unique voice and perspective was eagerly awaited.

"Awake Our Souls" is a stronger opener than "It's Your Revolution" and has the potential to be this album's "Starts With Me." From here, sadly, the album follows a pretty standard CCM formula. The album was written from a different place than Cast My Cares, and that's understandable, but the personal aspect of that album is what made it so endearing. The debut had songs of fear, struggle, and giving God full control, whereas Awake Our Souls is more about praising God in general. The whole thing is a bit of a catch twenty-two. If he was still writing songs with a message like "Great Reward" you may wonder if he had made any growth, but given the nature of the new songs, it's obvious he has overcome these things through Christ.

Taken completely on its own, Awake Our Souls can hold its own when compared to the work of other modern CCM or worship artists. Songs like the title track, "You Are Good (That I May)," -- the closest to that personal feel of the debut -- and "All I Really Want" are solid numbers worthy of attention. Also, anyone who has seen an interview with Timmons, or seen him play live, will certainly catch the key phrase in "Spring Up" as he sings the line "What if it's true?" There are plenty of catchy songs to enjoy throughout the album; even the bluegrass-y feel of "Everywhere I Go" is a really fun listen.

Tim Timmons is now about 14 years into the fight with an incurable cancer. If the doctors were correct, he would've passed on about 9 years ago. It's pretty obvious that God is in control and is not finished with Tim at this point. Tim has decided to let God "fight" the cancer for him and lives his life as if he's healed. His story is both phenomenal and inspiring. While his newest album isn't as powerful as his previous, I still give Timmons a slight nod over many for his unique style. His voice is definitely different and his songwriting style and approach stand apart. Awake Our Souls may not be your favorite album this year, but fans of today's CCM will definitely find enjoyment and some replay value. If you're just hearing about Tim Timmons for the first time, I recommend starting with Cast My Cares. If you're looking for some new CCM that has the same sound you like, but a slightly different perspective, Awake Our Souls will be right up your alley.