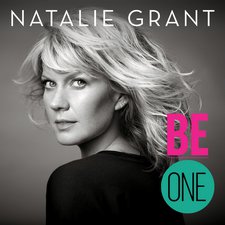 Natalie Grant
Be One


If any artist can lay claim to being the "Queen of Modern CCM," Natalie Grant might be the frontrunner. She has released nine albums, including the Gold-certified Awaken, won five Doves for Female Vocalist of the Year, has a tremendous presence on Christian radio, and is one of CCM's most impressive voices (both literally and figuratively). A lot has happened since Grant's last release, not the least of which being the bizarre "Twitterstorm" caused by her social media post about leaving the 2014 Grammys early, but she deservedly remains a steadfast and respected figure in the Evangelical community. But as Grant's latest sure-to-be-hit album, Be One, tells us, that does not ensure the highest-quality listening experience.

When Grant released Hurricane, I had commented that her status as a radio darling and CCM queen had all but required the inclusion of three songs; the hit single, the up-beat fun one, and the worship cover. True to form, Grant respectively presents "Be One," "Good Day" and the Bethel Music cover "Ever Be." "Good Day" even latches onto the latest trend in the ever-evolving genre of CCM with the snyth-heavy beats of EDM that offer up sonic reminders of Owl City's last two offerings. It's not a sound that Grant has done to this degree before, and she doesn't sound completely comfortable in that style, but it is clear she is having fun with it. But probably her most noteworthy song on the album is her stellar sibling duet on "Nothing But The Blood." The gentile pop sound of the song isn't anything extraordinary, but the chance to hear her sing with her brother, Steve, is a big highlight as both can show off the warmth of their vocals to a classic song, and it closes the album on a very solid note.

Unfortunately, overall, Be One might be Grant's most lackluster album. Much can be (and has been) made of the formulaic nature of CCM, and unfortunately Grant fully succumbs to it here. She is a woman with a message and can make enjoyable music, but she seems to sacrifice much of her unique abilities and personal stories to make her music relatable to as many people as possible. The things that have usually saved most of Grant's recent albums from falling into the category of ordinary CCM fodder are the songs where she has explored her more artistic and/or personal sides (like "Born To Be" "When I Leave The Room" and "In The End" from Hurricane). Be One seems to have no room for any songs like that outside of "Nothing But The Blood" (although a careful ear will pick up Grant's three daughters singing backing vocals on "Ever Be," a nice personal touch). And while I've never been huge critic of album art, I'm growing tired of the Grant's habit of all her covers being simple background-less headshots of her with a hint of a smile.

It also doesn't help that in spite of (or perhaps because of?) having no fewer than 16 contributing writers, many songs seem overly shallow or disjointed, like she's merely trying to acknowledge a message exists rather than revealing her personal perspective or a story relating to it. The biggest shame in that flaw is Grant has incredible stories to tell as a voice against trafficking and other causes, or even her aforementioned Twitterstorm experience, but she instead (again) opts to make a broad appeal. Matthew West relayed the same message as Grant's title track here ("Why sit around and wait for a miracle to come / When we can be one,") in a much better way back in 2012 with his single "Do Something" by telling the story of a listener whom God inspired to start an orphanage. Not that they aren't good messages, but they aren't much help or inspiration outside of the listener simply nodding their head in agreement (unless the listener happens to have never heard these messages before). "King of The World," in particular, suffers from a shallow delivery of a message; the opening line of "I try to fit you inside the walls of my mind" is an idea deserving of a full song, or even a full album, but here is just a single line amidst the broad and familiar God-is-God-and-I-am-not message. In fairness, two songs that stand out for the delivery of their message are album highlights "Love Has Won" and "Symphonies," the former as a moody semi-EDM pop song with a battleground theme with God as the undefeatable field commander, and the latter with a thoughtful metaphor of how God can raise up people's voices when they speak out in his name.

Grant surely deserves honor for her proven abilities and everything she has done as a voice in the community, but Be One is not an album that ought to add to that honor. It makes very few artistic statements and is primarily a vehicle for delivering shallow versions of great (albeit familiar) messages. She has made much better and much more memorable albums than this one, and she undoubtedly will again.