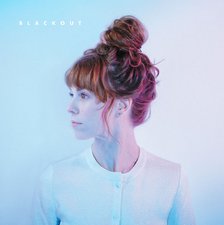 
Steffany Gretzinger is perhaps best known as the familiar voice behind hit songs from Bethel Music like "Reckless Love," "King of My Heart," and "Pieces," among others. In addition to her work as a worship leader with Bethel Church, her first solo offering, titled The Undoing, released in 2014, and contained the deeply moving song "Out of Hiding." With this new album named Blackout, Steffany returns with a solo follow-up full of worshipful, pop flavored songs.

First track "Save Me" meanders out of the gate with a mid-tempo groove accented by big, open drums and synthesizers. Lyrically, the message is a timeless one that bears repeating, with lines like, "My weakness is my honor not my shame/Leaning is my portion not my pain/I was frantic till You changed the pace/You won't give me more than I can take." Though some listeners may take issue with the last line, it fits the context of the song's message that only God can sustain and save us. It is easily this reviewer's favorite track on the album. Another standout is "Bright Ones," which features more of the same booming drums, swirling keyboards and a slightly faster pace. "Sing My Way Back" is a simple piano ballad with beautiful sentiments from the chorus like, "When I lose direction/when I can't see the stars/if we get disconnected/I'll sing my way back to your heart/I'll sing my way back to your arms." Another track worthy of mention is "All That Lasts Forever," due to its killer bridge section that comes and goes all too soon. It swells the tempo with a somewhat militant drumbeat, and lyrics, "death is just the dawn that leads us home to you" before settling back into a slower pace to end with keyboards high in the mix as the song fades out. The last song of note is closer and title track "Blackout," which delivers the fastest and loudest tune of the album. However, although it offers the most upbeat song of the track list, it does so with restrained intensity. Lyrically, Gretzinger defiantly declares that, "you can't turn out a light shining from the inside," as the drums, guitars, and keyboard work together to produce an ominous, borderline rock song. This reviewer would have loved more songs like "Blackout," and I hope that Steffany explores that direction in the future.

In fact, if there were any major complaints outside of an isolated lyric or two that could be taken out of context, it would be the pacing. This album could have benefited from an additional upbeat song or two, because much of the middle has the same feel, tempo, and sound. Combined with long track lengths and redundant pop sounds, many songs trend toward forgettable. This is a shame because when taking either the simple ballad or the full-on rock approach, Steffany's voice has the room to communicate both tender and passionate emotion respectively.

Bottom line: with its powerful, engaging vocals, and catchy pop melodies, Blackout is a worshipful, not-to-be-missed album of 2018 sure to please longtime fans of Bethel musicians, and fans of the pop/worship genre.