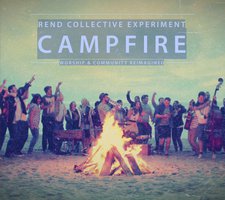 From the makers of organic hymnals and homemade worship comes the latest deviation from the traditional approach to making music: live worship recorded around a campfire on a beach in Ireland. But Rend Collective Experiment didn't just decide they are going to make a unique album, they are merely refocusing traditional worship away from the individuals and back to the community. And indeed, community is what this album is all about. Rend Collective have often gone out of their way to redirect the focus of their music away from themselves and brought it back to the community between believers and between God, and this is merely the next step. Of course, it does help if the music is good and the words are meaningful, and with this tried and tested collection of songs, Rend Collective surely delivers in that category as well.

Aptly titled Campfire, the album begins in a very fitting style with a brief intro of the universal anthem of community in "Kumbaya." Unfortunately, despite how fitting this intro is in theory, only co-lead vocalist Chris Llewellyn is singing. Maybe it's something that only bothers this reviewer, but I think it would be a whole lot more fitting if everyone was singing. "Kumbaya" is a song in which its power is felt in the people singing it, and if there is only one person singing, well, the effect just isn't quite there. It's not a big complaint considering the song is only half-a-minute long, but it is, after all, the first thing we hear (other than, of course, the waves breaking on the shore and the warm crackle of a campfire). But things pick up quickly from there with the equally-fitting "Come On" following up. This one does not miss. This song is executed perfectly and just draws the listener in as well as the band could have hoped for. And that is where the night of worship really begins.

From there, the band alternates between their more upbeat and slower songs. All the songs have completely acoustic and traditional instrumentation as, simply put, there are no electrical outlets on a beach. Despite that, the production does sound high quality (maybe a bit too high quality?), and any fears that an album recorded on a beach next to the vast expanse of the ocean would sound at all hollow or empty (like some live recordings do) are put to rest. Unfortunately, another small thing that bothered me was the editing between tracks. Sometimes it felt like the song started too suddenly, which is most notable on "Build Your Kingdom Here," which almost sounds like the recording started in the middle of the song. Usually on live albums, there is a big crowd of people cheering between songs, so it is easy to edit between one song and another, but Rend Collective's audience is certainly no bigger than maybe two or three dozen. I can imagine this must have been really difficult to edit, but even still, I kind of wish it had been done a little better.

Still, the worship itself is amazing. The effect that I get from listening to this album is almost exactly what the band was hoping for; it is an honest, pure, intimate night of community and worship that I have yet to tire from hearing. Each time I hear it, it is just as fresh as the last time. With the lack of electronics, many of these songs border on being straight-up acoustic renditions, and many others have received a bit of a facelift as well; it certainly works to the album's advantage. The standout tracks include the aforementioned "Come On;" the absolutely gorgeous and moving rendition of "Second Chance," whose lyrics and message are thoroughly enhanced by the setting; the fun and upbeat rendition of "Movements" (another song where the setting greatly enhances the effect); and the closer "Praise like Fireworks," which may be the best live recording I have ever heard. The only song that didn't quite have the effect the band intended was their cover of Matt Redman's "10,000 Reasons;" it lacked the energy and intimacy that the rest of the album has (not to mention that I'm kind of confused as to why a cover was included in the first place, as Rend Collective has more than enough quality songs to make a full live album of their own, original material).

Overall, Campfire is fantastic. Technical and theoretical issues aside, this is a very easy album to recommend. I enjoy it immensely and I love the themes that Rend Collective is trying to promote. Just don't go looking for any hard copies in stores; they are only available from Rend Collective Experiment's website. Otherwise, it is available through the major digital outlets. But in any event, this is definitely another top-notch release from the Irish worshipers and a successful first foray into live recordings.