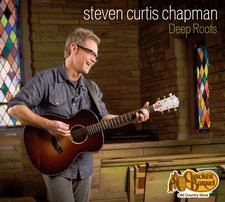 Since 1987, Steven Curtis Chapman has seen almost unparalleled success as the result of his high-quality songwriting, exquisite musicianship, and an uncanny ability to connect with his listeners. Last year, Chapman celebrated 25 years since the release of his first album, but it also marked his departure from the Sparrow Records, the label that had been his home during the entirety of the past two and a half decades, in favor of Provident Label Group and Reunion Records. Since then, Chapman has proven to be a quick worker, first dropping a Christmas album mere months after switching labels, and then last month again suddenly announcing a new project available exclusively through Cracker Barrel Country Stores (and also downloadable from iTunes and Amazon). For this, his nineteenth studio release in his career, the Kentucky homeboy decided to go back to his roots, aptly entitling this album Deep Roots.

For those that are longtime fans of Chapman's work, this album is full of nothing but delicious treats and glimpses into Chapman's past, present, and future, and one glance at the track listing will tell you why. In addition to featuring country legend Ricky Skaggs, Chapman has collaborated with three generations of his own family. While he has featured the vocals of his son Caleb on previous releases, this time around, he also features his daughter-in-law Jillian (the wife of his youngest son Will), as well as his father Herb Sr., and brother Herb Jr. The result is a deeply personal and intimate forty-seven minutes that will cause any Chapman fan to want dust off their banjos and fiddles (whether they happen to have any such instruments or not).

Featured on this album are six faithful interpretations of classic 19th century hymns, acoustic renditions of five of his previous works ranging from decades old to fairly recent, and a cover of a classic Bill Gaither song. After so many years of playing contemporary pop/rock, it can be easy to forget that Chapman "grew up is a state where the grass is blue" (as per the lines of his playful "hip-hop" song "Got To B Tru"), so Chapman feels right at home in playing the style of music commonly known as "roots music" (something of a mixture of folk, bluegrass, and gospel). Leading off is "Tis So Sweet to Trust in Jesus," followed by the splendid and worshipful father/daughter-in-law duet of "How Great Thou Art." After that is Chapman's pairing with Ricky Skaggs in "What a Friend We Have In Jesus." Skaggs' vocals, with their thick southern accent, work well with Chapman's and add a distinctly country feel to the song. But it isn't until after the next hymn, "Blessed Assurance," that the real charm begins. This is where Chapman, after singing the first verse and chorus of the lively worker's hymn "Life is Like a Mountain Railway," introduces to the audience his father Herb Sr. I challenge the listener (especially if they are a seasoned Chapman fan) to not be hopelessly charmed by the moment they hear his aged and thoroughly classical country vocals. In fact, Herb Sr. was a guitar teacher and first taught the instrument to young Steven and his brother Herb Jr. (whom SCC introduces prior to the third verse). This trio continues on into the next song, the fifty-year old gospel classic "He Touched Me," written by Bill Gaither and most famously covered by Elvis Presley (and in fact the title track of his 1972 gospel album).

After that, the album refocuses from hymns to acoustic updates of some older SCC classics. The first of these is "Hiding Place" from his very first album, First Hand. The rendition is actually pretty similar musically to the 1987 original (only with some roots influence), but the best part about it is just hearing an update of a dated classic from Chapman's repertoire. After one more worthy hymn cover, "Rock of Ages," young Caleb Chapman joins his father for an even gentler version of his already-soothing 1999 hit "Be Still And Know." "His Eyes" is another much appreciated update to a dated classic (in fact, this song won him his first of 57 Dove Awards in 1989), though like "Hiding Place," this version does not stray too far musically from its original recording. "My Redeemer is Faithful and True" is another inclusion from his 1987 debut, and one that received a bit more of a facelift thanks to the supporting vocals in the chorus from his father and brother. And wrapping up the album is a an acoustic rendition of one of Chapman's most personal songs, the heart-wretching "Cinderella," featuring the ending verse that Chapman now sings during his concerts in the wake of the tragic death of his daughter Maria.

As worthy as the album is, there are some problems. For one thing, the music never really gets off the ground energy-wise. This is not an uncommon problem amongst acoustic projects, but it gives the album much more of a side-project feel, even though it is a full-length album. Also, the music doesn't stray far from the mold for roots music, but it is so well-executed and full of personal touches that most won't mind. Nevertheless, I am thoroughly grateful to Steven Curtis Chapman for making a project like this, and can honestly say the album is a joy to listen to, but I still eagerly anticipate his next full-blown, original, studio release.

In a time when music is continuing to evolve and overproduction and electronic-based rhythms and beats reign supreme, it's a breath of fresh air to hear a project like Steven Curtis Chapman's latest. Deep Roots gets back to SCC's Kentucky upbringing as he examines hymns and reimagines some of his originals ("Be Still and Know" is a personal favorite) in acoustic, folk and even bluegrass stylings. Sometimes banjo, dobro, and steel guitar can be found on a few tracks, but ultimately, things are kept earthy and simple; SCC's voice and the beautifully written hymns take front and center. Accompanying Steven are special guests Ricky Skaggs ("What A Friend We Have In Jesus") and several of his own family members, including his son Caleb, other son Will Franklin's wife Jillian Edwards ("How Great Thou Art," where she sounds a lot like Kari Jobe with her charming and sweet vocal accompaniment), and his father Herb Chapman Sr. and brother Herb Chapman Jr. Deep Roots is a wonderful, under-the-radar release that gets back to the basics in a refreshing way; it's a palette-cleanser for today's often overly busy music and a great tool for intimate worship. Don't miss it. - John DiBiase, 3/10/13