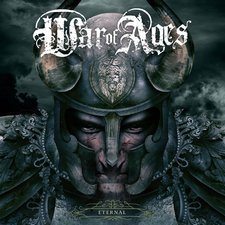 War of Ages could be considered bread and butter metalcore. They keep it simple and dwell on the basics of the genre, focusing on performing the fundamentals strongly instead of branching out into new territory. One could choose to fault them for not being original or adventurous enough, but that would be to miss the rather impressive collection of solid, enjoyable music they've already created. Their fifth album, Eternal, is yet another rock-solid release and a worthy addition to their repertoire.

As was the case on Arise and Conquer, As I Lay Dying frontman Tim Lambesis has been recruited for production. His influence is obvious, as the two bands have very similar sounds. This similarity goes so far as guest appearances by Lambesis himself and As I Lay Dying clean vocalist Josh Gilbert on "Desire" and "Lack of Clarity," respectively. The songwriting and performance here are tight, with appropriately crunchy guitars throughout, well-placed breakdowns, and enjoyably technical solos scattered across the album. In fact, guitarists Branon Bernatowicz and Steve Brown deserve special credit for their highly technical yet firmly melodic work. Leroy Hamp's vocals are guttural and heartfelt, and there's also a consistent harsh vs. clean duel, another staple of the genre. On top of this is a naturally strong focus on Christ. This isn't groundbreaking, it's just the basics elevated to their highest state. At the same time, the album is not completely without variation. For example, Sonny Sandoval of P.O.D. makes a prominent appearance on the title track, and his distinctive rapcore vocals mesh quite nicely with the music. Furthermore, the ending instrumental successfully avoids being cliché or boring.

It's tempting to dismiss War of Ages as just another As I Lay Dying copy cat band, and this album doesn't do anything to discourage such criticism. The similarity is unquestionable, especially since Lambesis's hands are all over this release. But at the same time, it's undeniable that this is a band that knows how to appeal to every metal fan's basic senses. There's power and melody, headbanging moments and plenty of shredding. It's unpretentious metal at its best, and this reviewer strongly encourages any hard music fan to check out Eternal.