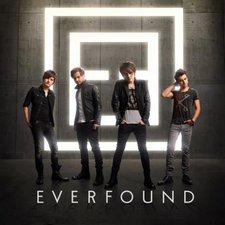 In 1996, the Odnoralov family, including the four brothers Nikita, Ruslan, Yan, and Illarion (all under the age of 8) immigrated to Colorado from Russia. They were a musical family, each having learned the piano at a young age, and the brothers had been performing together for over a decade. In 2005, they started calling themselves Everfound. Between 2007 and 2011, they independently released three EPs and one full-length album, and in 2012, signed a record deal with Word. And now in 2013, their first full-length widespread release is about to hit the shelves in the form of their self-titled label debut.

Of all the new bands that I've heard over the past couple of years, I don't know if I've been personally pulling for one harder than this one. Part of it is that I am fascinated by their backstory and I have a soft spot for bands of brothers like this. But the other part of it is that there were a couple of times that this album blew me away. Granted, there is a no shortage of areas that Everfound can improve, but the first three tracks simply scream that this band can do something special. Opening with the short instrumental "Pyatigorsk" to lead into "Go" and "Unless," Everfound reminds me a lot of a combination of another great (former) brother band in Remedy Drive, only with more energy and more electricity (both literally musically, and figuratively). In particular, the edgy "Unless," featuring a segment in Russian, is the biggest highlight of the album, bringing up memories of Rebecca St. James' rocking "God Help Me" from her 2005 album If I Had One Chance to Tell You Something. Within the confines of these three songs, I can hear a band that could fill the void of high energy alt pop/rock within the Christian music industry similar to Abandon.

But, unfortunately, from there on, the album turns down the route of accessible radio pop-rock with singable choruses and simpler song structures. "Never Beyond Repair" fits the bill perfectly for a radio hit, opening with big strings and building into a soaring chorus with uplifting and inspiring lyrics on how God can still use us despite our faults. "Count the Stars," "God of the Impossible," "Hurt," and "We Are Alive" all follow similar made-for-radio patterns, and Everfound's inclusion on the The Bible: The Epic Miniseries Soundtrack, "What Love Means," while lyrically a heartfelt talk with Jesus, similarly screams accessibility. On the other side of the spectrum, "Hallelujah" provides a comeback of the high energy pop-rock from early in the album, even with a danceable beat, and "Somewhere New" is a chilling ballad that is their most lyrically mature song on the album. "Torch" and "Take this City" are both solid mixtures of both radio accessibility and the energy that they show at various times through the album, and I wouldn't mind if the musical direction that the band took went something along the lines of these songs (though I feel they are capable of so much more). Lyrically, there is also definitely room to grow, as most songs ("Something New" being the obvious exception) follow a pretty generic songwriting pattern and could use a bit more variance.

The long and short of it is that Everfound's self-titled debut is a perfect example of a young band searching for their musical identity in the midst of an industry that requires a quota of radio songs on each album. They have offered very big hints at being something special in the near future, and I desperately hope that they take the route that was hinted at in songs like "Unless," "Something New," and "Hallelujah," rather than the route hinted at by songs like, "Never Beyond Repair," "Hurt," or "Count the Stars." I like this album and I like this group, and I'm crossing my fingers that they could be something truly special.

While the pop rock band Everfound has been around for a good while with plenty of independent albums, their self-titled debut on Word Records is the world's first widespread look at these four Russian-born brothers and their skill level. With a solid mix of electronic elements and guitars, the Odnoralov brothers make a great attempt to make an explosive start, never skimping on the energy for the album's fourteen tracks. Tracks like "Go," "God of the Impossible," and "We Are Alive" showcase what the band does best: using soaring vocals when appropriate and using crescendo to engage the listener throughout the song's duration. On the other hand, "Never Beyond Repair," "Count the Stars," and "What Love Means" serve as obligatory radio-esque tracks that don't retain long-term interest very well. Where the album stretches thin, too, is the often-oversized expanse of the musical atmosphere. While Everfound are inarguably attempting to own their pop sound with going as big as possible as often as possible, not every song benefits from their ambitious approach, tiring out with a slight formulaic air. Where artists like Phil Wickham and labelmate For King and Country are able to keep a balance of holding the instrumentation and vocals in tandem to let the album become "epic" on its own merit, Everfound needs a little more time to nail down this approach without forcing it. Still, it's encouraging to hear musical virtuosity (especially from a new artist) paired with unmistakable biblical truth, and Everfound has an remarkable precedent to build upon. - Roger Gelwicks, 7/14/13