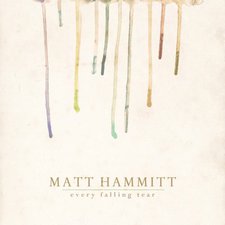 Music, so often, has been used as a way to make emotion tangible. It can encourage, discourage, comfort or dislodge people in ways simple words cannot. Matt Hammitt, Sanctus Real frontman, is releasing his debut album with plenty of emotion binding it together. Last year, Matt and Sarah Hammitt had to battle through the dolor of wondering whether or not their unborn child was going to survive. During an ultrasound they discovered their son, Bowen, had something called Hypoplastic Left Heart Syndrome. Essentially, he was going to be born with half of a heart. Thankfully, the story has a happy ending and Bowen is safe at home with his parents (and celebrates his one-year birthday before this album's release!). The songs on Every Falling Tear were written as a means of coping for Matt through these difficult times. Having knowledge of Matt's story adds a layer of depth to each song and makes a seemingly ordinary praise album much richer.

To eliminate a few presuppositions you may have about Matt Hammitt's debut: it is more encouraging than depressing and it sounds vastly different than a Sanctus Real album. The songs are very calm, usually driven by a piano or an acoustic guitar. Most of the tracks do not include direct references to Matt's son, allowing them to be borrowed and applied to the listener's own personal struggles. "Let Go" is a perfect example of this, with its contrasting of God's complete control with our limitations, "I want to hold on 'cause I'm afraid, And I didn't ask for it to be this way, Somehow I found myself caught in the grey, Reaching out for fear, running out of faith." This track, co-written by Joy Williams, is one of the strongest songs on the album. Unfortunately, the majority of the other songs do not reach this uniqueness from a lyrical standpoint. The imagery used is standard fare for a modern praise album, sticking mostly with direct statements or commonplace metaphors. However, Matt makes up for the lyrical drawbacks with passionate vocals and consistently impressive musicianship throughout.

The best songs on the album are actually the ones that are slightly less vague and are harder to separate from Matt's experience. "All of Me," the first track, is possibly the best of the ten found here. The vulnerability of Matt's words makes it almost feel intrusive to listen to and is incredibly powerful, "Afraid to love, Something that could break, Could I move on, If you were torn away, And I'm so close, To what I can't control, I can't give you half my heart, And pray He makes you whole." The second track, "Holding You," continues to pull straight from the situation with Bowen. The song puts the listener in the minds of Matt and Sarah, showing the frustration and helplessness they felt.

Audrey Assad contributes one song to this album as well. "Little Light" fits in seamlessly with Matt Hammitt's vocals and the album's sound, "Jesus bends to hear you breathe, His tender hands are holding you tonight, His heart is ravished when you look at Him, And oh the endless mercy in His eyes, God is here, little light."

When all the dust settles, you can't help but come away from Every Falling Tear feeling reassured. Even the simple act of empathizing with Matt Hammitt's ordeal is painful, but his insistence that Christ will prevail is uplifting and encouraging. While the lyrics sometimes feel redundant, the strong emotional core and musical merit help balance things out.

Music and hope work hand in hand so well. When times are hard or someone is grieving through the storms of life, music can help muster up the strength one needs to pull through. With the stress that the Hammitt family went through in the past year, it's no wonder that Sanctus Real frontman Matt Hammitt wanted to share some of the music that helped him in the midst of the storm. You won't really find any upbeat songs on this album but what you will find is a transparent offering of desperation and trust. From the first chord of "All of Me" to the final ring out of "This Is Grace," all that you will find is a melancholy heart crying out for help. "You Are My Treasure" is one of the greatest worship songs penned by Hammitt as it simply proclaims that God is our treasure and all that we need is found in Him. Another great treat is "Little Light," featuring Audrey Assad. To tell the truth, it's completely Assad's song with some background vocals provided by Hammitt. However, their voices work so well together; I would even consider it the best song on the album. Musically, it's not complex, but that's what makes it so beautiful. Considering this is the first solo album from Matt Hammitt, it might not capture a lot of attention. Sanctus fans: it doesn't have the same energy, or approach to music, as Sanctus Real so don't have misconstrued expectations. If you've never experienced pain or grief, then this album will probably not fit you very well, but for those who have - this might stir up some hope. Every Falling Tear is proof that Jesus provides peace in the midst of the storm. Well done, Matt Hammitt. - Ryan Barbee, 9/7/11