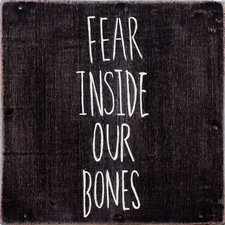 The Almost
Fear Inside Our Bones

Aaron Gillespie and his band The Almost have already released two fairly different albums. Their newest outing, Fear Inside Our Bones, is no exception to this rule. In fact, the group's third record has even more of a stark difference from its predecessors. Much of the album features a southern sound; it even has some alt-country at times. The album also contains a bit of a 90s alternative feel as well. Overall, what you get with Fear Inside Our Bones is a fantastic sounding record.

The album opens with the lead single, and southern rocker, "Ghost." The song features a new sound for the band, and one that may have worried some listeners when it was initially released. The track actually sounds more like something Aaron's former counterpart, Dallas Taylor, may release with his own band, Maylene & the Sons of Disaster (especially after IV). It also leads nicely into the title track. "Fear Inside Our Bones" opens with the most rock 'n' roll instrument of all-time: the sitar. While my opinion of the sitar may be a tad exaggerated, the instrument (or possibly guitar effect) work perfectly within the scheme of the song. This slightly less southern-flavored jam bleeds right into the alt-country vibe of "I'm Down." The album's second single continues to impress. "Never Be Like You" starts the 90's sound and then "Come On" really hammers it home. Both are great tracks, but the latter seems to beg for you to sing along more than most.

After a rocking opening five tracks, things slow to a softer pace with a tune that may bring the beach to mind. The lyrics to "The Florida Sun" obviously revolve around the Sunshine State, but is more pointedly an open look at Gillespie's career thus far and his desire to simply go home. Aaron sings, "I traded it all [the beach near his house] for a dirty road that put a damper on my soul. I just wanna go home." In the chorus, he concludes, "After everything I've done, I wanna go back to the Florida sun." This one is likely to grow on the listener and become a favorite. Things pick right back up with "Fight Song" where Gillespie sings about facing fears and not giving up. The alt-country sound returns with another album stand-out in "Won't Let Go." The album begins winding down with the rocker "So What;" Gillespie proclaims, "So what if I don't give a care who you think I really am and never ever understand? So what, so what?" "Love is Coming Down" is the second to last track and talks of the hope and love of Jesus. "Lonely Boy" is the final song; it's a fun tune that will have you singing along, but it's probably the weakest -- especially lyrically. The lyrics tell the story of a boy, his sister, leaving home, and his future nephew. It's a bit of an odd ball for the album as a whole, but somehow it still manages to do fairly as the finale.

The Almost have produced a stellar product that has the ability to excite current fans and gain new listeners, but it also has the slight possibility of alienating some as well. Fans of the more post-punk leanings of Southern Weather, or the more polished Monster Monster, may not appreciate the raw nature of Fear Inside Our Bones. This is probably Gillespie's best work to date -- Underoath included (Yes, I know that's borderline blasphemous) and something a bit refreshing in today's overly generic music scene. If you're looking for some good advice: Buy this album as soon as possible.

The term "side project" seems to imply secondary status, messy experimentation, or just being downright uninteresting. Whether or not these descriptions are always valid, it's a pretty special event when one really takes off and outgrows the stigma of its name, and The Almost is a textbook example. With two winning albums in the books, Aaron Gillespie and friends have solidified the band's place in the rock circle after a four-year break with Fear Inside Our Bones. The opener, "Ghost," gives an accurate indication of the rest of the album as a distinctive heavy-hitter with plenty to unpack, and the action has merely just begun. Sing-along rockers like "I'm Down," "Never Be Like You," and "Come On" keep the listener involved from the start, while honest cuts like the title track, "The Florida Sun," "I Won't Let Go," and "Love Is Coming Down" reveal the songwriter's tender heart at full emotional throttle. Rarely letting up the energy, Gillespie's vocals have never sounded more urgent and passionate, and The Almost sells their concept quite convincingly in eleven tracks of alternative rock goodness. Any missteps here are minor at worst ("The Florida Sun" arguably prods along at a slow pace), and in the midst of average-quality rock albums coming in droves these days (Tooth & Nail unfortunately not excluded from this pattern), an album like Fear Inside Our Bones is an engaging and truly unique effort. Three-for-three in excellence, The Almost just made the summer that much more refreshing. - Roger Gelwicks, 6/9/13