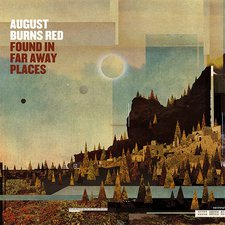 
When I was in high school, most of my chums and I came into our own, discovering who we were through a soundtrack of metal and hardcore. Then a new beast called Christian Metalcore emerged and ushered in a new era of headbangs and mosh pits among us. Leading the charge for many of us was a band calling themselves August Burns Red. I stumbled onto a few of their tracks from their Solid State debut, Thrill Seeker (most notably for myself, "Barbarian," "A Shot Below The Belt" and "Speech Impediment"). I was beyond blown away. I'd never heard anything like it, so harsh and chaotic, and breathtakingly violent. It was exhilarating, and it scared me. Music never looked the same after that.

After two albums in that style, and a change in lead singer, what they needed was smoother production value, and perhaps a little bit more song structure. Constellations was exactly that. They hit the perfect middle ground between garage and sound studio.

I know this sounds more like bio than a review, but I need to make it clear that it was after this point in their history that the proverbial seas were separated--"the seas" being ABR fans. After Constellations, the band seemed to become ambitious, setting aside their old ways and taking up a more stable, accessible sound in Leveler. From this point onward, there would always be "the hardcore fans" and "the new fans." Being with them since the beginning and falling head over heels in love with them in Thrill Seeker and Messengers, I am cursed to always compare their new music to their old. In Leveler, and forward into Rescue and Restore, and now their sixth studio album, Found In Far Away Places, they found a niche that they very much like, or at least that keeps the fanbase growing like weeds. I don't care to contemplate which is truer.

In this niche, the low-tuned chugs patter on in a manner straightforward enough for a simple bobbing head, Matt Greiner ends every bar with a rolling-tom fill, there is a spirit-lifting guitar solo approximately every three songs, and for some reason, it is impossible for a song to go from start to finish without stopping in the middle for a completely out-of-left-field musical interlude involving instruments that will almost certainly not be present during live performances. Honestly, the genre experimentation was intriguing on Leveler, but I expected that if it continued, they would learn to blend it in a little more seamlessly on future records. But two albums later, they haven't improved. The groove of the song ends abruptly, replaced by a piece of music that doesn't necessarily fit inside the song in any way, and then slowly ramps up until it is replaced again by metal, just as abruptly. It's simply too choppy.

To be fair, it is not surprising why their fans now number in the millions. Everything they write is extremely tight and expertly produced. The boys in ABR are some of the most talented in the industry; it's just getting frustrating hearing them write the same thing over and over again. If I may use an analogy, I am the type of guy who will always go for the girl with glasses and weird hair and some socially awkward character trait that ultimately endears her to me. This preference extends into music as well. ABR's music has become a dolled-up beauty pageant version of itself: obviously beautiful, but lacking in character.

I would love to talk about all the ways that Found In Far Away Places is new and interesting, but it isn't. It's just excellent. If an album is bad, I can at least riff on the specifics of its flaws. There just isn't much to say. You heard their last album, right? Yeah, picture that. You're done. Admittedly, "The Wake" does bear some resemblance to older material, tearing up the predictability. But that's the only time it happens, which is just a nasty trick to play on people when it's the album opener. Songs like "Martyr," "Broken Promises," "Blackwood" and the deluxe edition extra "Marathon" are the heavier tracks to look out for. The best tracks on the album include "Ghosts," which not only features guest vocals from A Day To Remember's Jeremy McKinnon, but it also gives us a rare glimpse into the parallel universe where ABR has clean vocals. Unfortunately, as soon as McKinnon shows up in the song, the entire accompaniment sounds way too much like I'm just listening to ADTR, so the accolades are muddied. (Interestingly, this same phenomenon occurred back in 2009 when Between the Buried and Me's Tommy Rogers appeared in the song "Indonesia.")

Not to dump on Jake Luhrs, because he is one of the most diverse and talented vocalists in metal, but I think we can all agree that ABR shines extra bright when they go full instrumental. Their Christmas album can attest to that. In the final track, "Vanguard," we finally hear the structure cut loose a bit, as the instrumentation just swims around a while. This is the only track that really impressed me. There were no urgent lyrics being pushed, no pattern that had to be followed. A cathartic end to the album, but it's disappointing that with all their desire to add in alternative music styles, more of their tracks couldn't have been more relaxed and seamless as this.

If you read this review expecting another raving, praising, perfect score, I'm sorry to disappoint you. Found In Far Away Places is certainly a superbly composed record, and many a fan of flawlessly manicured metalcore will no doubt love it. Unfortunately, I'm a "hardcore fan," and I can't help myself.

August Burns Red has become a stalwart in the Christian metal and hardcore industry. They are known for extremely talented musicianship and always producing top-notch material. Leveler saw the band reach new heights and Rescue and Restore saw the group expound on that a bit. Unfortunately, their newest venture, Found in Far Away Places, shows little to no growth for the band since 2011. The album for the most part feels much closer to Leveler Vol. 3 than anything else. It seems like ABR has found a very comfortable place in their career and are refusing to budge. The band's only attempt to break up the monotony in the sound is moving to a slower musical section before going right back to the constant chugging. The most impressive pieces come in "Identity" (featuring a surf rock section in the middle), "Seperating the Seas" (with a middle-eastern feel in the break), and "Majoring in the Minors (Reprise)," found in the deluxe edition (featuring a really cool western vibe). The only other real song of note is "Identity (MIDI)," also a part of the deluxe edition. The track is a complete "instrumental" MIDI version of the track found on the standard edition. MIDI is basically an outdated musical format, but ABR does a really nice job of putting it together for a super cool sounding bonus. Outside of the more nuanced moments, the top track is likely the Jeremy McKinnon (A Day to Remember) featured "Ghosts." The instrumentation on Found in Far Away Places is as good as expected, but the creativity and sound is a little lackluster. Other than a few really interesting and bright spots, most of the album sounds the same. ABR has even refused to move on from the same style of album cover that they have continuously used for years. Huge ABR fans may want this record, but it's not going to give you anything new or exiting to hear. Sadly, instead of being a bright spot in this year's subpar Christian metal scene, August Burns Red basically continues the trend. The biggest difference is that they do it in a more technically proficient manner. - Review date: 7/14/15, written by Michael Weaver of Jesusfreakhideout.com