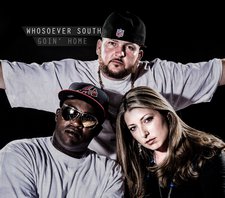 Whosoever South (Rowdy Eunice, Sarah Eunice, and Mike Mitchell) is a unique, at least to the CHH community, hip-hop trio. The group, at times, blends the sound of hip-hop, country/bluegrass, and gospel, as well as incorporate some jazz and soul elements. While the idea isn't a new one -- Gangstagrass is a group that also blends hip-hop and bluegrass in the secular realm (known for their song "Long Hard Times to Come" from the television series Justified) -- it does have potential for success. Unfortunately, their debut album, Goin' Home, only scratches the surface of what could be.

"Where We From" opens the album and flat out nails it. It's a perfect blend of the bluegrass and hip-hop elements and by far the best song on the record. Sadly, this isn't the sound that dominates its entirety. The second tune, "He Loves Me," is an immediate change to a completely different sound. The whole vibe shifts to more of a reggae infused hip-hop blend. While as a single the song is fun, it just does not fit in with the rest of the album. The country roots come back to light with the gospel fueled "All the Time." It's more in line with the opener and contains all of your favorite bluegrass instruments. The title track is next up and features only some mild highlights of the country sound -- and then it's over. Only four tracks into a ten track album from a group that bills themselves as a "unique combination of gospel/hip-hop/country flavored music" and it basically abandons the style for a straightforward style of hip-hop.

Though the best sounds of the album are gone less than halfway in, there are still a couple of worthwhile listens. The soulful, and somewhat jazzy, tone of "That's Life" is a definite winner that still manages some uniqueness. Also, the violin featured anthem, albeit a slower anthem, "Give My Life to You" is another solid track that should be the prayer of all Christians. There are some other decent moments in the rest of the record, but nothing necessarily that will have you begging for repeat listens.

One of the biggest detractors on Goin' Home, other than simply not sticking to their base sound, is several of Sarah's raps; they simply just fall flat for the most part. She has a very mechanical flow that focuses more on pronunciation than feel and sounds closer to spoken word poetry many times. In contrast, she sounds great on the R&B flavored "Your Love." Also, "He's Got It" sticks out like a sore thumb. The dance inspired song is seemingly meant for the club, but the idea is lost in translation. The track is easily the weakest of the bunch and is even more oddly out of place than the aforementioned "He Loves Me."

Whosoever South brought in a heavy hitter in Asaf Fulks to produce their debut. He did an excellent job of getting great sounds but wasn't able to keep them on track with their signature sound. When an artist is bold enough to say they, "...created a sub-genre all to their own," and, "It's not really been done before" (especially since Gangstagrass has been doing it, sans the gospel message, longer), you expect them to do more than three songs on a full album in said sub-genre. While the overall lack of bluegrass flavored hip-hop is aggravating, there are still some enjoyable moments. If you're one to pick up any new hip-hop artist or album, or just want something a little different, Goin' Home could still be a viable option for you. If you're looking for a steady dose of songs like lead single "Where We From," you probably just want to download a couple individual tracks and call it a day.

Whenever a new group pops up and essentially claims that they have invented a new genre of music, you simply can't approach a new album of theirs without expecting something unexpected. The problem usually is, however, that the unexpected response is very often, "I thought I wasn't supposed to have heard this before?" In the case of newcomers Whosoever South, that isn't quite the response, but it is more accurate than to say that their self-proclaimed new genre of "Country Crunk," as displayed on their debut Goin Home, is anything radically new. With that said, their southern gospel/folksy approach to hip-hop is, in fact, quite refreshing and definitely worthy of a listen just to get a taste of their potential. Using a wide variety of instruments not usually associated with hip-hop--such as harmonicas, banjos, trumpets, and dobros--Whosoever South definitely has a great concept in the making... if they can settle on a sound to master. Nearly every song on this album is a slightly different style, giving the album a pretty sporadic feel. The opener "Where We From" blends bluegrass and hip-hop excellently, while "I Know" has a very contemporary blues feel, yet "That's Life" is very much like a gospel song with some short, fast raps thrown in, while still "Give My Life To You" is not unlike the type of R&B-flavored hip-hop one might hear on a Reach Records album (and that is just four of the ten songs). On top of that, the female member of the trio, Sarah Eunice, needs to work on her rapping so it doesn't sound so uncomfortably forced. But the production is excellent and not overdone, and while many times the lyrics and raps are on the border of cheery and cheesy, they are otherwise solid, enjoyable, and uplifting (if not a bit recycled). Because of the sporatic-ness, the album does not lend itself well to replay value, but there is at least one or two tracks (or so) that pretty much any listener can latch onto. Hopefully Whosoever South will learn a lot from this record, because I can definitely say if they can settle on the right sound (preferably with more organic leanings), they have great potential. - Mark Rice, 5/13/13