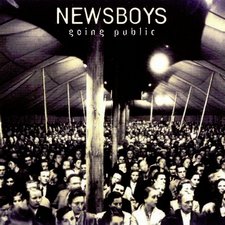 Starting the album off is the song "Real Good Thing" - a catchy, synth-tinged song about God's grace. While a solid song in its own right and a good album opener, it does not prepare you in any way for the song that follows - their signature hit "Shine." "Shine" was an incredibly enormous hit for the Newsboys and was the song that really put them on the map. Boasting one of the catchiest and most anthemic choruses I've ever heard, it sounds every bit as good today as it did 10 years ago - and its message is as hard-hitting as ever. "Shine/ Make 'em wonder what you got/ Make 'em wish that they were not/On the outside looking bored." The success of this song makes me wonder why the CCM community isn't producing bold hits like this today?

While "Shine" is definitely the highlight of the album, Going Public is certainly not a one-hit wonder. "Spirit Thing" and "Truth and Consequences" are upbeat, catchy songs that showcase the Newsboys' sense of humor. The band also delivers a tight, rock-edge with the songs "Lights Out" and the title track. Lyrically thought-provoking as well, these songs tackle those who think they're smart enough to predict the end times ("Lights Out"), as well as those who may be a "closet Jesus fan" ("Going Public").

The Newsboys do slow it down a little from time to time. "Let it Rain" is a touching song about the apostle Peter, featuring a beautiful melody with a great narrative. "Be Still" offers up a nice worship song, while "When you Called my Name" addresses the struggles ministers/pastors sometimes have. However, it's the last song that really takes the cake. "Elle G." is a heartbreaking song about suicide. While remaining somewhat upbeat musically, the song addresses the devastating effects suicide has for the ones left behind. It's a great song both lyrically and musically since it manages to avoid sounding either cliched or out-of-place. All in all, it's a great way to end an excellent album.

This album definitely has it all. It manages to seamlessly meld together the pop/rock/mellow sides of the Newsboys, while delivering a great batch of songs in the process. This is definitely one of the highlights in the Newsboys' extensive and extremely successful career. Going Public sets the blueprint for albums to follow and definitely establishes the Newsboys' signature sound as a force to be reckoned with in CCM. A must have!