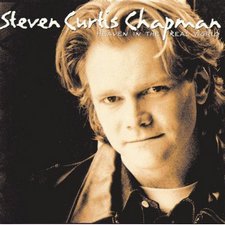 Following the incredible success of The Great Adventure and the subsequent live album, Steven Curtis Chapman released Heaven In The Real World. This was an album that met with enormous success, being certified Gold in only 5 months and becoming his first album to become certified Platinum. And in a lot of ways, Chapman ventured out into new creative territory with this album. But despite its success and the five more #1 hits the album produced, I just don't this this album measures up to the same level as Adventure.

In this album, Chapman attempts to do another "prologue" like in Adventure, but instead of an instrumental, it starts out with voices, specifically what sounds like news reports about gangs, violence, and drugs, followed by a preacher talking about the source of our hope in this world. As these voices continue talking, the song starts building up behind it until you finally hear Steven's singing. Now, the purpose of the prologue is to set up the mood/tone for the album, and this sets it up to be kind of depressing. Yeah, ultimately, the prologue ends with the preacher declaring that our hope is found in the power of God (the proverbial "light shining in darkness"), but that still doesn't change the fact that the very first thing you hear on the album is a newsman saying "a report out today says that the number of gang members has increased by 65% in the past year." It really is hard to recover from that, especially if you are expecting to immediately hear the title track like the single version of the song. I'm sure this intro works for a lot of people, but just not for me.

From there, the album becomes an eclectic collection of catchy beats, interesting song titles (I mean, "Dancing With The Dinosaur"?), and Steven's usual superb songwriting. You gotta give Steven a lot of credit for the great variety of sounds he provides, from bongo drums on "King of the Jungle" to waves, seagulls and creaking timber in "Burn the Ships." The only problem is that the songs just don't seem very cohesive, which is quite un-Chapman-esque in my opinion. Even in Adventure, Chapman throws in a pseudo-rap track and makes it work very well, but here it feels a bit disjointed from track-to-track. It is not as noticeable the first couple of listens, but the more you hear this album, the more evident it feels.

But don't get me wrong; the music is great. "King of the Jungle" is infectiously catchy, as is "Heartbeat of Heaven" and "Facts Are Facts." "Remember Your Chains" is among the more tender and inspiring songs Chapman has written, and "Still Listening" (beginning with what I believe to be Chapman's three young children singing a grace prayer to the tune of "Frere Jacques") is a prayerful and nostalgic hymn-like song. Oh, and of course the famous title track. However, I do have one slight qualm over the content of his song "Burn the Ships." The song is about resisting temptation and taking the "easy path," but the metaphor it uses is that of Hernando Cortez, upon arriving in Mexico in 1519 from Spain, who allegedly burned his ships upon landing so his men had no option to return to Spain a "failure." But what was the price of their success? I'm sure most people here are familiar enough with North/South American history to know that Cortez essentially wiped out an entire civilization (the Aztecs) in the name of King, Country, and gold. Oh, and God of course. I understand the point of the song, but I do wish he were a little more careful with his selection of content.

So, with that said, I really do like this album. I'm even tempted to say it's a very good, or even great album, but I can't. There are just too many things that I find as faults with this album structurally. Because of this, whenever I feel like I want to listen to some old-school SCC, I always gravitate toward either The Great Adventure or sometimes Signs Of Life. I can definitely recommend it to anyone who does not yet have this album (particularly SCC fans), but I think there are better options.

Coming off a career-defining album such as The Great Adventure must have been a daunting task, but Steven Curtis Chapman created a gem in Heaven in the Real World. It probably won't ever be listed among his best albums, but there was enough about this record to be deemed memorable, including the encouraging, anthemic title track; the quirky celebration of old school values in "Dancing with Dinosaur" and "King of the Jungle." While I may be more likely to turn to the more raw nature of Signs of Life or unique territory explored in All Things New in a pinch, there's still a lot to like about this classic (albeit dated) album. - 7/19/12, John DiBiase of Jesusfreakhideout.com