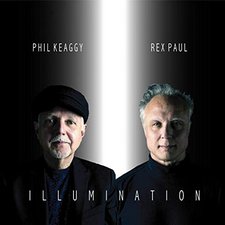 
Those who know of Phil Keaggy exclusively by word of mouth are likely only aware of his near-legendary status in Christian music circles as one of the most accomplished musicians ever to pick up a guitar. Fans of the genre whose knowledge extends a bit beyond this well-deserved iconic stature know that, in addition to having crafted a veritable mountain of mind-boggling instrumental pieces and albums over the course of the last five-plus decades, the phenomenally-talented Ohio native is also responsible for generating some of the most infectious and accessible straight-ahead pop/rock releases in the modern-day inspirational catalog.

His latest outing, Illumination, a joint effort with fellow six-string virtuoso Rex Paul, fits squarely into the latter category. The opening cut, "Don't Hold Back," lands roughly at the halfway point between the mellow adult-contemporary undertones of Keaggy's 1995 True Believer album and the rawer, more stripped-back groove of his career-defining Crimson and Blue project from two years earlier. The verses and chorus of "Calling Us Home" call to mind Grand Illusion-era Styx, while its bluesy, more funk-filled outro channels latter-day Extreme. "I Believe" is woven from the same dreamily dissonant fabric as early-period King's X acoustic chestnuts like "Summerland" and "(Thinking and Wondering) What I'm Gonna Do." And "Day of the Lord" is simply breezy, jazz-tinged pop at its finest.

There are one or two missteps among the proceedings. The average '80s aficionado will either grin knowingly or cry foul at the overly close likeness of songs like "Glorify Your Name" and "Nothing Can Separate Us" to their mainstream counterparts (Yes' "Love Will Find a Way" and Tears for Fears' "Everybody Wants to Rule the World," for the curious) depending on how much of a purist they happen to be. Likewise, listeners who sat back and marveled at the near-unbelievable fretwork on Keaggy's instrumentally-based undertakings may find themselves wishing that he and Paul would really cut loose and let the fireworks fly, particularly on slower, less-engaging tracks like "Spend My Life with You" and "Let Everything Else Go."

All of that being said, given the fact that Keaggy began plying his trade well before the 1970s even dawned, it is arguably the artists that Keaggy may or may not sound like who drew inspiration, however indirectly, from him, rather than the other way around. And, to its credit, the album isn't entirely devoid of lightning-fingered pyrotechnics. But, even when Keaggy and Paul do toss off the occasional jaw-dropping solo or fill, they inevitably do so to enhance and embellish, rather than overshadow, the songs in which they appear. And it is that aspect of the record, more than any other, which renders it such a winning undertaking.

Existing devotees will have little trouble recognizing Illumination as one of Keaggy's (and Paul's) finer works. Conversely, those who still count themselves among the unconverted would do well to listen with unbiased ears to a pair of performers who continue to quietly and methodically turn out the sort of inspiring classic pop- and rock-based projects that few of their peers, past or present, have been able to replicate.