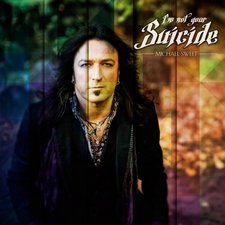 Michael Sweet
I'm Not Your Suicide

As inconceivable as it may sound to some, the time elapsed between Stryper's full-blown 2003 reunion tour and the present day is nearly twice as long as that of the band's original run, which ran from the release of their debut EP, The Yellow and Black Attack, in 1984 to the summer of 1990, when the somewhat controversial (at the time) Against the Law album first saw the light of day. But, while the band's decision to reconvene nearly a decade and a half after parting ways in 1992 was rightly cause for celebration among the legions of followers who patiently hoped against all hope for such a glorious occasion, most of them would have to admit that, while the hard-rocking foursome's first few post-millennial efforts certainly had much to recommend about them, it wasn't until last year's Second Coming (a collection of rerecorded classic hits and two new tracks) and its absolutely stellar follow-on, No More Hell to Pay, that the quartet fully and truly equaled the best work from their late '80s heyday.

Fans of the group's Reagan-era output are likely to be more than pleased with the opening song trio on this, Stryper frontman Michael Sweet's sixth full-length solo offering. The decidedly metal-inclined leadoff cut, "Taking on the World Tonight," is aflush with the heavily-compressed guitars, larger-than-life percussion, and wailing vocals that were Sweet's stock in trade during MTV's early years. On the other side of the coin, the slightly softer "All That's Left (for Me to Prove)" will no doubt call to mind classic mid-tempo Stryper pop-metal ditties like "Always There for You." And the rousing "The Cause," which speaks to standing strong in the face of adversity, is about as prototypical an arena anthem as any of those penned during Sweet & Co.'s spandex-clad tenure.

Perhaps sensing that he needs to distance himself a bit from his band-based output, Sweet tosses out "This Time," a surprisingly convincing, and ingratiatingly catchy orchestrally-buoyed duet with Kevin Max that edges close to Beatlesque territory. Even less prototypical is the country-pop "Coming Home," which may well give the Luke Bryans and Rascal Flatts of the world a run for their money. Even more unexpectedly along those same lines, few long-time devotees would ever have guessed that the record's brightest moment would come via the sparkling country and western-leaning rendition of Neil Young's classic 1972 chart-topping single, "Heart of Gold," the expressive, high-lonesome steel guitar tones of which easily render it the most poignant moment on the album.

That being said, I'm Not Your Suicide isn't an entirely wrinkle-free affair. Entries like "Strong," "Unsuspecting" and the title track, serviceable though they may be, lack melodies memorable enough to lodge them in the listener's long-term memory once they conclude. Likewise, the plodding power balladry of "How to Live" is the sort of piece that put off legions of '80s metal heads who rued the fact that cloying adult contemporary numbers like "Lonely" and "Honestly" deigned to share album space with shredding metal anthems like "In God We Trust" and "To Hell with the Devil." And less than innovative lyrics like "I've got the power/ And the glory/ I've beat the odds/ And I want more" ("Taking on the World Tonight") and "You've shown me How To Live/ Encouraged me to try/ Inspired me to give/ And reach beyond the sky" ("How to Live") do their respective cuts few favors.

Its faults notwithstanding, Sweet's latest solo outing is still worth investigating by both his existing fan base and those who have yet to dive headfirst into his back catalog. Those in the former camp will find that I'm Not Your Suicide's harder-rocking songs slot in perfectly along those they love and remember from Stryper's pre-millennial works, while listeners on the latter side of the fence are likely to be pleasantly surprised to find that Sweet is anything but a metal-loving one-trick pony - as the country-inflected material so clearly proves. Just as importantly, Sweet deserves points for looking past the risk of alienating one or both of those groups in order to craft the record he wanted to make. To be sure, even though I'm Not Your Suicide is neither his strongest band-based or solo effort, it may well prove to be his most interesting.