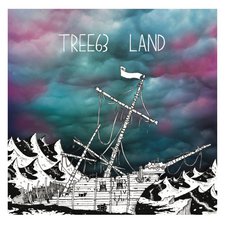 
Tree63 may have gone on an indefinite hiatus/breakup in 2009, but that has not stopped their version of Matt Redman's "Blessed Be Your Name" from gathering radio airplay and being sung in churches to this day. And after a series of reunion shows proved popular in homeland South Africa, talk of a new album began to heat up. And now, thanks once again to Kickstarter, John Ellis is back with original members Darryl Stewart and Daniel Ornellas for the band's first album in 8 years.

The rise of Tree63 coincided with the sudden appearance and market for pop/worship albums that turned up around the turn of the century. It became easy for the trio to establish themselves in that market, which they would remain in for the rest of their initial run. It may come as a surprise, then (or perhaps not, given the band's newfound independence), that Land is a lot less of a pop/worship album and a lot more of a musical journey. Opening in a minor key with staccato vocals from Ellis on "Alive," immediately the listener knows this will be a different ride than The Answer To The Question. "The Storm" drives that point home even more with vivid lyrics, echoing guitars, and percussion. Both these songs, taking the lyrics at face value, indicate that they still write with a worshipful bent as they always have, but instrumentally they seem to have gone all-out Delirious?.

In fact, one of the most striking things about this album is how much it sounds like Delirious?'s album The Mission Bell. Granted, the South African trio has always had to bear with comparisons to their British counterparts (both being international bands making pop/worship music around the turn of the century with similar-sounding vocalists), but never has it been so easy to compare. Without prior knowledge, a listener can easily mistake songs like "A Whisper" or "Hard To Believe," for example, as a reunion of the Brits instead of Ellis' band. Does this hamper the project? Honestly, it did slightly to this reviewer, but it likely won't for most listeners. And I would very much prefer it sound like one otherwise-unique band I admire than having it sound like dozens of alike-sounding bands I don't.

Truth be told, the first half of this album is chock-full of high quality music, regardless of any similarities to Delirious?. The disjointed lyrical approach and bass-driven beat of "A Whisper," coupled with the soaring chorus of "Everyone! Heaven's here / Heaven for everything," make this song a highlight, and the infectious string-plucking melody of "Standing On It" makes another highlight. "If God," "Hard To Believe" and "Ship" continue the trend of quality tunes, before the more traditionally-structured "Every Reason" opens the relatively lackluster back half of the album. It's not that "Every Reason," "Stumbling Stone," or "The Greatest Story Ever Told" are, in and of themselves worse than tunes in the front half, but the style suddenly shifted into more of the pop/worship type sound we are used to from Tree63. But by the time the album closes with a very Answer To The Question-esque ballad in "Never Had A Winter," one cannot deny this was a highly worthwhile listen.

The fact is that Land is without a doubt the most diverse, nuanced, and interesting Tree63 album yet, while maintaining a worshipful tone. Lyrically, the band was able to stay clear of all the most common clichés and even subtly maintain a nautical theme. Musically, each song is unique from each other and (apart from Delirious?) pretty much any other Christian artist out there. It likely won't win over the band's old fans that liked them as worship artists exclusively, but I can see a whole new audience being won over by this evolved form of Tree63. Land is a quality record that should be heard.