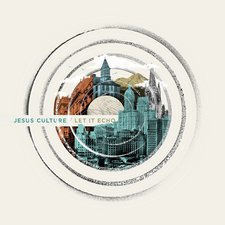 
Over the past decade, contemporary worship bands have been springing from the ground like flowers. While many fade away after an album or two, few others prove themselves to have mettle enough to stick around as long as Jesus Culture has. Marking the tenth year since their independent release of Everything, the band comes bearing Let it Echo, another passion-filled contemporary worship album.

For those familiar with Jesus Culture, there won't be any unexpected surprises showing up on Let it Echo. By no means is this a bad thing, but it does keep the album from making a hefty mark on the band's discography. Opening up with the energetic "Never Gonna Stop Singing" (fronted by Kim Walker-Smith), the pace and bar are set, without the following tracks significantly deviating from this pattern.

Some of the track highlights are "Fierce," "Miracles" (both fronted by Chris Quilala) and "Everything and Nothing Less" (fronted by Chris McClarney). These three songs in particular seemed to have a lot of heart poured into them, something which can be felt even outside of the jam-packed worship arena. At the very least, these pieces are worth streaming to get a feel of the album and the heart behind the band.

One of the album's strengths is found in its vocal diversity; while many of the songs seem to be cut from a similar cloth, the alternating vocalists help to add some depth and texture. Lyrically, the album focuses much more on the emotional, rather than theological, aspects of worship. Additionally, Let it Echo relies a little too heavily on excessive line repetition, but much of that comes down to personal preference.

While Let it Echo is a decent enough album, not much sets it apart from this year's other worship albums, nor from Jesus Culture's prior efforts. This time, unfortunately, there doesn't seem to be any standout tracks which would profoundly add to their legacy, so this album may not be the best starting point for new listeners.