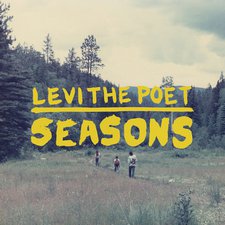 Every once in a while, there comes a project that demands the complete and undivided attention of the listener from start to finish. This is not necessarily because the music is good; while that certainly helps, even the best music in the world doesn't have to be listened to intently to be fully appreciated. The same is true about lyrics, and also about the overall delivery, etc. All that helps, but even if everything falls into place and works perfectly, one can still oftentimes get away with just casually popping it into their ears or stereos and letting it play in the background. But sometimes, in a rare occasion, that is simply not an option. Why? There really isn't a good way to describe such projects, simply because, well, they need to be listened to to be believed. With Seasons, Levi the Poet has created one of those projects.

In Levi's previous two albums, Werewolves and Monologues, pretty much the only instrument has been his voice; in other words, any music was few and far between (or in the case of Monologues, nonexistent, save the bonus track featuring Ghost Ship), leading to projects whose only feature was a essentially a man half-chanting, half-screaming at the listener and were potentially difficult to swallow. In Seasons, however, most tracks have some sort of accompaniment (usually musical, but sometimes otherwise), and as a result, this is easily Levi's most accessible (and best) work to date. Those who have heard Levi before and wrote him off as too one-dimensional to make it very far had better come back and give Seasons a listen because this album, in hindsight, was one of the best albums released in 2012.

From start to finish, Levi gives diverse and brilliantly nuanced performances of well-written and oftentimes self-convicting poems. Levi has certainly written a lot of personal stuff in the past, but here it seems that every single track deals with some aspect of his personal life almost like a diary (something he's compared his poems to on a previous record). Some of the issues he deals with on this album involve his relationship with his father ("Harsh Man," "Damned If You Do, Damned If You Don't") and people in general ("Infimary"), his father's suicide ("Van Morrison Reminds Me Of You"), selfish depravity ("The Teacher Speaks"), wrestling with his emotions ("Dear Pianist"), and even the relationship between art and acceptability ("College-Ruled Lines"). And in the midst of all this beautifully organized chaos is how everything relates with God, and he even delves into his struggles with his faith in many tracks ("Inconsistant," "Stillbirth," "Resentment," "Boundless"). All these heavy topics combined with his naked passion makes for a very exhausting record, and indeed, that is the only real flaw with the record; it takes endurance to make it through the whole thing, but even that adds value to the record.

There are too many highlights on this album to be able to give each their due; "Harsh Man" opens the album with Levi's first real melodic track he's ever done and even adds a duet with his wife. "Stillbirth" is Levi's own eerie interpretation the hymn of "Be Still My Soul" intermixed with his own spoken verses. "Damned If You Do, Damned If You Don't" is a track that many with strained relationships with their fathers can relate to, and the home video audio in the background puts it over the top. "Dear Pianist" appropriately features a piano accompaniment and is one of the most gut-wrenchingly honest works I have heard in a long time. And topping everything off is the epic "Resentment," which thematically ties the whole album together over an echoing guitar (if there is one track I would call the best, it would be "Resentment," but you need to hear the whole album before you can fully appreciate it).

Seasons is an absolutely brilliant piece of art from start to finish. Its overwhelming power will almost certainly turn many off, but anyone who has survived either of his previous two albums can easily handle this, as well as those who liked those albums in small doses. Even if the album didn't feature any melodic substance, like Monologues, this would still be his best work, but that aspect of the album puts it over the top. And like Monologues, Levi is offering Seasons as a free gift as well through Come&Live! Records. My advice? Get it now. Pay if you feel led to pay, or download it for free, but whatever you do, I would be hard-pressed to find an album that is as easy to recommend getting as this one. Just make sure you are prepared for the emotional siege.