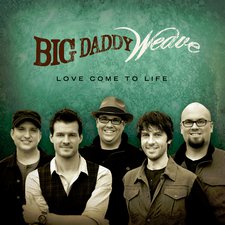 Cynics can easily point to CCM bands being a dime-a-dozen these days, and with the influx of contemporary radio artists all carrying basically the same sound, it's incredibly easy to discredit them without inspecting any of them in any real detail. But Big Daddy Weave, previously mostly staying away from this stereotypical persona, is back in action after almost four years of inactivity with Love Come to Life. Now on their sixth studio record as a band, a ravenous fanbase has asked, and now they have received. But what is it that they received, exactly?

In true CCM fashion, nearly every song has the potential for becoming a single, with the first three tracks, "Jesus Move," "Magnificent God," and the title track, seemingly battling it out to grab the most attention from the listener, and the album's ear-catching potential has more than reached an all-time high. "Stay," "If You Died Tonight," and "Redeemed" all serve as the essential ballads of the album to even everything out, and "Overwhelmed" ends the album epically, crescendo-ing with a choir. But the absolute highlight of the album is undoubtedly "Maker of the Wind." With folk sensibilities all over the place and a chorus bringing to mind the fun-loving style of Rascal Flatts, this is BDW in their element, and the rest of the album pales in comparison to its fun and fast-paced nature (the saxophone's appearance at the end is just the icing on the cake). Mike Weaver's Bart Millard-esque vocals are back in flawless form, and though their feel wasn't ever especially different from the crowd, they get the job done with charming flow. As a general rule, the safe ground is rarely ever shaken, leaving it ripe for interesting experimentation that will only punch up their approach to make it all the more engaging.

Most of the time, however, the key distinctive factor, which is necessary for every album, is just not there, and this is especially disappointing given Big Daddy Weave's track record--famous for a folk pop sound of strings and fast paced vividness reminiscent of Dave Matthews Band. While the band has never completely mimicked DMB, nor has ever reached that level of musical brilliance, that discernible mark has always kept Big Daddy Weave refreshingly separate from their peers. On Love Come to Life, however, their sound has devolved into an easy contemporary vibe that has been heard more times than any radio listener cares to count.

With Sidewalk Prophets' Live Like That released just three weeks earlier, Love Come to Life feels somewhat redundant to unleash on the market; even down to the similar album titles, these two bands only feel like carbon copies of each other, catering to the exact same crowd. While one cannot call Love Come to Life an album without any redeeming qualities, it's incredibly difficult to pick out truly great material here that one couldn't search out in any other contemporary band. The impact is that it's hard to recommend Love Come to Life over any other album of its sort; it's come to the point where they are seamlessly blending together with the rest of the field without much delineation from what's normally heard.

CCM fanatics everywhere have only more reason to rejoice with Big Daddy Weave's return from hibernation, as the sugary-sweet pop hooks, shiny choruses, and inspirational moments aren't in short supply. Without much distinction to speak of, this album will no doubt get its fans, but lose them quickly to the band that mimics them next. In the end, Love Come to Life will satisfy fans of Christian radio, as well as any of the aforementioned bands, but perhaps no more than that.