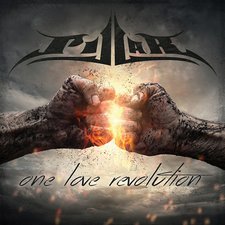 
Pillar is finally ready to release their long expected crowd-funded project boasting the classic lineup of Rob, Noah, Lester, and Kalel. Not only is the band back with full force, but they have presented us with one of their best efforts to date: One Love Revolution. This album feels like a natural progression from For the Love of the Game (the last time we heard from this particular lineup), with several nods back to the glory days, most noticeably the Fireproof-style rapping on the title-track and "Paratrooper."

Every member of the band executes their respective parts almost flawlessly. Lead singer Rob Beckley is at the top of the game here, at times sounding better than ever. From the throat shredding screams on the bridge of "We Ride" to the quiet confidence of the ballad "Unafraid," Beckley's voice exuberates with passion and purpose. Lester Estelle has a commanding control of his drum kit, making every kick and drum fill very intentional and powerful. Noah Henson's guitars are just as evocative as the drums with heavy riffs abounding, and versatile airy guitars complementing these meaty riffs on songs like "Paratrooper" and "Disconnect." Rounding out the lineup, Michael "Kalel" Wittig delivers seismic baselines, but the best groove is the more audibly dirty one on album highlight "Embrace The Chaos."

As one might expect, the themes of this album revolve around uniting under the banner of Jesus' love and anthems for spiritual warfare. Their ability to continually create songs with similar messages without ever sounding like a carbon copy of previous songs is alone a testament to the time and thought that went into constructing this album. There are also a few songs that deviate from these themes, such as hearing God's voice on "Disconnect" and dying to self on "Nails." There is little that is thought-provoking here, but the simplicity and directness of the songwriting is refreshing.

While the majority of the album is rock solid, there are a couple weaker moments on One Love Revolution. "Ember of Hope" doesn't compare to some of Pillar's other interludes like "Elysian" or the one at the end of "One Thing." It doesn't break up the album's pacing, but it seems a little disjointed in a few spots. Another criticism is the black sheep "More Alive," which is a good CHR tune, but it fits on this album about as well as "Smiling Down" did on For The Love of the Game.

There are two bonus tracks on this album, but they are each exclusive to the physical and digital versions. The physical CD, which is only being released through Lifeway, has the bonus track "Fall The Foe," while the digital version (iTunes, Amazon) has the bonus track "A Season." Both are exceptional cuts that fit sonically and thematically with the rest of the album, so if you can't get enough of the band's in-your-face rock tunes, then you will want to get your hands on both. The easiest solution would be to buy the physical edition through Lifeway and buy the individual mp3 for "A Season" (if it is not "album only").

When listening to One Love Revolution, it's hard not to think about how missed these guys have been in the Christian rock scene. Though this album is not quite as defining as their magnum opus Where Do We Go From Here, it has a certain timeless quality about it. Pillar fans and fans of the genre can't go wrong picking up the latest release from one of Christian rocks biggest staples. class="coversize" align=right> Early Thoughts...
Pillar is finally ready to release their long anticipated crowd-funded project which boasts the classic lineup of Rob, Noah, Lester, and Kalel. Between the meaty guitar riffs, throat shredding screams, and spiritual call-to-actions, One Love Revolution embodies everything fans love about the band. Including the two bonus tracks, this album is comprised of six full-throttle rock assaults ("Embrace The Chaos," "Nails"), five songs that are less "in-your-face" but still relatively heavy ("Disconnect," "We Ride"), and three epic power ballads ("Unafraid," "Don't Cry Forever"). There are plenty of nods back to the glory days, and Fireproof fans will be especially happy to hear Rob with his rap/singing on "Paratrooper" and the title track. As with much of Pillar's catalog, this album would benefit from more originality, but what they do they execute exceptionally well. Though it's not album-of-the-year material, One Love Revolution is a solid return from a rock band that has been dearly missed... --->

"Fireproof" and "Where Do We Go From Here" are a couple of my all-time favorite albums, and since it's been six years from Pillar's last release, I'm stoked to see what comes from the band's classic lineup reunited in One Love Revolution.

As I started listening to this new album, I found each track to be good, on point musically, and Rob delivering a standard Pillar message to listeners. However, about halfway through is where I really started to love this album. "Paratrooper," "Embrace the Chaos" and "Lion Leads the Way" are simply great songs that take me right back to those awesome Pillar days of old. The vocals are filled with intensity, the drumming and strings are superb, the chants beg for raised fists, and one can't help but love these tunes.

There are some solid ballad types found here as well, giving a nice reprieve from the hard rock joints. "More Alive" and "Don't Cry Forever" are examples that come out rather nicely. While not every song found on One Love Revolution is good (like "Unafraid" and "Shooting Star"), most of what current Pillar fans will find here they'll enjoy, and I personally will be playing this album for a while to come. - Review date: 8/10/15, written by Kevin Hoskins of Jesusfreakhideout.com

We seem to be in an era of reunions; ten-year anniversary tours are abounding, and bands that broke up years ago are getting back together for new albums. The next example is the one and only Pillar. After other projects over the years, including a Rob Beckley solo album that never happened, the classic line-up is back at it for One Love Revolution, and it's everything you'd want in a Pillar album, especially if you dig Where Do We Go From Here and The Reckoning. The fiery title track pumps you up at the very start of the album, and the infectious rock groove continues through tracks like "Nails" and "Paratrooper," while "Unafraid" and "Don't Cry Forever" and rock ballads that bring to mind the band's 2003/2004 hit single "Further From Myself." The Rob/Noah/Kalel/Lester combination is an excellent one, with incredible chemistry readily apparent. One Love Revolution is far from groundbreaking, but it's a solid album, and it's comforting to hear an old favorite getting back together to show that they still have it, and can still do rock music better than a lot of new rock bands. - 8/14/15, Scott Fryberger of Jesusfreakhideout.com

It's only been six years since Pillar released their last full-length album, but it feels closer to ten. As a fan who began to lose taste for the group after Where Do We Go From Here, it was interesting to see the original group reunite (it also may be why their absence feels like ten years as that album came out in 2005). One Love Revolution shouldn't necessarily be considered a triumphant return, but it is most definitely a solid one. Long time Pillar fans should certainly be happy and fans of hard rock in general will find enjoyment here. Pillar didn't pull any unexpected punches, but they have given listeners some solid rocking tunes. You will want to pick this up if your Pillar nostalgia is kicking in, or if you just want to listen to a new collection of hard rock jams. Either way, there's nothing wrong with rocking Pillar's comeback. - 8/31/15, Michael Weaver of Jesusfreakhideout.com