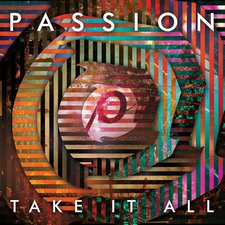 Passion
Take It All

The Book of Ecclesiastes famously begins with a song of lament, in which the Teacher says (among other things), "What has been will be again, what has been done will be done again; there is nothing new under the sun" (Ecc. 1:9). These words of scripture have been used time and time again by cynics who have resigned to "the way things are," whether rightly or wrongly, and resolved to move on with their lives. I doubt any reader can honestly reflect on themselves and their attitudes and honestly say there is no single area in their lives in which they have reached this resignation. In the world of Christian music, that area is worship music. Like snowflakes, no two worship songs, worship albums, worship artists, or worship themes are exactly alike, but the effort necessary to distinguish between them is far too burdensome for many, particularly when better options exist. It is not that cynics of this type are unnecessarily harsh or critical; they are just being honest with themselves, and can find no intellectual reason to renew hope.

Passion's 2014 release Take It All, like most live worship projects, is hit-and-miss, and the value of the project depends on the attitude and selectiveness of the listener. Perhaps it will move the listener and bring them to a place of true worship of our savior. Wonderful! Then the album will have achieved its intended purpose (sans turning a profit, of course). Perhaps it will be nothing new under the sun for the listener; I can find no fault in their logic. All the usual complaints for worship projects, and live worship projects in particular, are (arguably) valid. But is it really "just what it is," or is there more to intrigue listeners of Take It All than simply being the 17th annual Passion album?

Well, one common criticism of Passion in recent years has been the imbalance of worship leaders (or, in layman's terms, "too much Tomlin"). Hopefully, folks will be pleased to learn that this album does not suffer from that imbalance. Tomlin does sing more songs than any other artist featured (three), but every other artist (Kristian Stanfill, David Crowder, Matt Redman, and Christy Nockels) has at least two, a parity that has been unseen for a long time (if, arguably, ever). And, as always, Passion has been the birthplace of many great and popular worship anthems, like what "At The Cross [Love Ran Red]" is destined to be. And for everyone who is not an Ecclesiastes 1 cynic, every song is worth listening to, as this project lacks any painfully generic and/or uninteresting songs that have scattered previous Passion projects (like last year's "The Lord Our God"). The catchy "Don't Ever Stop" starts off the project with a bang of energy (though the backing tracks may annoy many listeners). While the pure energy pretty much dies right there after the opening track (another common complain of past Passion projects), Stanfill and Nockels follow with two more highlights in "Never Gonna Let Me Go" and "Let It Be Jesus," and with Tomlin's "At The Cross [Love Ran Red]" and Crowder's "I Am" rounding out the first five songs, Take It All features possibly the strongest opening five tracks in many years.

Instrumentally speaking, banjos, folk guitars, and even hammered dulcimers make their presence known throughout the project, often times integrated with electronic elements in a way that can only make me think David Crowder must have had some significant say in the creative direction of the project. And while going so far as saying that the musical approach was more innovative and creative would be inaccurate, it is safe to say that it makes for a more interesting and varied sound than previous Passion projects. But, truth be told, Take It All does have many of the same pitfalls as most live worship projects (often overly generic songwriting, like "Almightly" or "Worthy;" unnecessarily long, extended songs like "My Heart Is Yours" or "At The Cross [Love Ran Red]"; occasionally a "you had to have been there" vibe, like "You Came To My Rescue"), so an Ecclesiastes 1 cynic can still feed their negativity.

Overall, Take It All is a very solid project among live worship albums. Familiar enough to appeal, and new enough to keep the listener's attention, Take It All takes several steps in the right direction without any real regression. No one will be turning to Passion anytime soon for creative inspiration, but perhaps it might make them appreciate our Savior a little bit more.