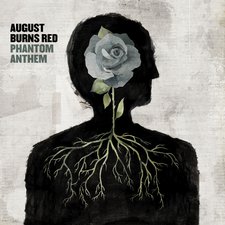 
Metalcore stalwarts August Burns Red hit a new creative peak with 2013's Rescue and Restore, which saw the band inserting non-rock genres for spurts of thrilling ingenuity. 2015's Found in Far Away Places, however, saw the band taking this stroke of brilliance and turning it into a formula. I doubt this happened on purpose, but nevertheless, Found was a mechanical exercise where those "random" trips into different genres happened between the 2:00 and 2:20 mark on nearly every song. Initial listens were exciting enough, but once the surprise was gone, absent also was any reason to keep listening. 2017's Phantom Anthem, then, is a shockingly welcome return-to-form, sticking predominantly to the heavy metal style that this band has spent fourteen years perfecting, along with appropriating some of the major-key riffs that made Leveler such a compelling experiment.

An interesting case study is the second single, "The Frost." For most artists, a song with no chorus or a song with tempo changes would be unique, but for ABR, "The Frost" is a unique entity in their catalog precisely because it has something like a chorus and because it sticks to only one tempo the whole way through. This song shows how impeccable the band's craft has become, even at their most straightforward. Cloaked in such "simplicity," it can be easy to forget that we're hearing technical prowess that's nearly unrivaled in the genre; seven albums in, ABR has taught listeners to have high standards.

Across the board, though, each member is stretching himself, whether it's vocalist Jake Luhrs screaming higher than ever before or drummer Matt Greiner playing more complicated beats than ever before. The band is at its most jaw-dropping, though, on the two tracks that were masterminded by bassist Dustin Davidson: "Lifeline" and "Carbon Copy." Davidson, who has incredible bass work throughout the album, is surely Phantom's MVP. As I write this sentence, at 3:00 pm on the album's release day, I would bet that by 7:00 pm tonight, there will be hundreds of studious young guitarists sitting in front of their speakers with "Lifeline" on repeat, attempting to learn the song's imposing network of intertwined, poly-rhythmic guitar riffs. It's a musical triumph, as well as a lyrical highlight, as Luhrs compels listeners not to try to fix people's problems for them. Whether this was intended or not, "Lifeline" functions as a beautiful meditation on parenting and how parents must eventually let their kids discover lessons and experience failures for themselves.

The lyrics are scattered both in topic and quality, probably because a handful of members share the writing duties. If there's a theme that ties the whole record together, it's an encouragement to persevere through hard times and to be brave, not only for the sake of your own future but also that of future generations. This theme is best presented on lead single "Invisible Enemy" (which premiered with a must-see music video) and "Coordinates," which is one of the only tracks featuring a notable exit from metal: a bluesy solo that fits the tune nicely. That moment should please those who liked Found in Far Away Places more than I did, as should the environmentalism-based lyrics of "Carbon Copy," which is precisely as chaotic as an ABR closing track should be. At the other end, "King of Sorrows" functions as the perfect opener, with a scorching showcase of conceptual lyrics about a self-proclaimed "king" and "patron saint of empathy" who feeds off the hurts of others for his own happiness and worth. The poetic genius of that track makes a song like "Float" all the more bewildering, which is essentially just a bunch of cliches strung together.

From a Christian perspective, the album is scant in explicitly spiritual lyrics, but lines about looking inside yourself or lines about all of us being lost appear to lean more towards Pelagianism or universalism than orthodoxy. Still, the songs are vague enough that many listeners will likely be encouraged by their own interpretations. Personally, I fall in the camp of listeners who never cared much for ABR's lyrics or for Luhrs' delivery of them; I'm here for the instrumental work. Yet, even with this negative bias, I deem Phantom Anthem wholly worthy of my time. Surely there are other fans like me, just like there will inevitably be the "Their old music is better!" types of fans. But for all of us, ABR has given us the best gift that we can reasonably ask for from a veteran band: dependability.