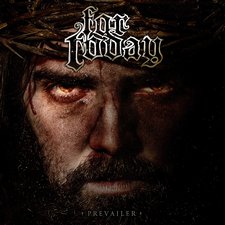 Last year, For Today made a huge jump from the beautiful Facedown Records lake to the daring ocean known as Razor & Tie. With that move came the release of [arguably] their best album yet, Immortal. The album was well-received and displayed the guys at the top of their game both musically and lyrically. Not a year later, For Today is following up their Razor & Tie debut with an EP of new material (and a new version of a song from Immortal), as well as a DVD that accompanies the EP. Prevailer keeps their forward momentum going strong.

Prevailer opens fiercely with "From Zion," which pretty much picks up where Immortal left off. It's a great track, with strong instrumentation (including a new rhythm guitarist in Sam Penner, formerly of In the Midst of Lions) and the signature screams of Mattie Montgomery; however, it feels a little too familiar. Instead of saying it complements Immortal, it almost feels like they recycled parts of "Fearless" and turned it into a new track. It also feels like it was possibly a b-side from Immortal. Regardless, it's a strong start for Prevailer, and it leads into the worshipful and convicting "Crown of Thorns." For Today focuses on two different concepts in this song: the crucifixion/resurrection of Jesus, and the necessity of humility. In addition, Montgomery also takes some of the responsibility for His crucifixion, saying "We crown Him with a crown of thorns" and "It should have been me!" (Both of those moments are also opportunities for live audience involvement, as the latter of the two creates a perfect musical environment for some moshing.) "Crown of Thorns" showcases For Today's heaviness in both music and lyrical content.

"Flesh and Blood" focuses on the paradoxical existence of Jesus on Earth (when He was both man as well as God), as well as the powerful things that He did and is continuing to do now. "Is He just flesh and blood, or is there more to the power I see? Filled with the strength of God, but He moves and breathes as a man, just like me" expresses the wonder of Jesus in the flesh. And it's all set to some of For Today's quick paced hardcore, with breakdowns as necessary. My favorite track from Prevailer is next; "Open Heaven" is the strongest track (of an impressive bunch, no doubt) and is filled with some of Montgomery's most uncompromising lyrics yet, set to unrelenting guitar riffs and beats that demand repeat listens. "It's what the rocks shout, and the stars speak: only one God reigns! This is the day when Heaven and Earth meet, only one God reigns!" allude to Luke 19:40, when Jesus says that the very rocks would cry out to Him if He were to silence his followers. Prevailer finishes with an acoustic rendition of the lead single from Immortal, "Fearless." An acoustic version of a hardcore song is always an interesting idea, and I was excited to hear this rendition. The arrangement is solid, and the song translates rather well into an acoustic setting, though they did have to rearrange the song a little bit to make it work. It's nice to hear some straight-up singing, provided by guitarist Ryan Leitru. The acoustic "Fearless" is a cool idea, and I'm glad they included it here rather than as a bonus track on Immortal, but I probably won't come back to it very often.

The main feature of the DVD contains almost an hour and a half of footage spanning the career of For Today, from its existence as an unknown, independent, local band, to the well-known, mainstream giants they are today. They talk with each member about the formation and their respective entrance into the line-up. It was interesting to see that Montgomery left his Blood & Ink Records band Besieged to join up with For Today (replacing their former vocalist, Matt Tyler, in 2007), and to hear the story of their merch guy, who literally went on tour with them because of a coin toss. From there, the video spends time talking about each band member of the current line up (though this was recorded before Mike Reynolds' departure, so he is named as the current guitarist, while Penner is shown as the band's drum tech, a role he took after In the Midst of Lions broke up - in addition, there are profiles for both David Morrison, the band's founder and original drummer, as well as his replacement, David Puckett, who joined after Morrison left to become a missionary in South America), and then includes the story of how they ended up signing to Facedown Records and their time with them. A tidbit of information I was not privvy to before was that For Today's Facedown debut, Ekklesia, was actually recorded in its entirety before Montgomery joined the band, and it was only after his re-recording of the vocals that Facedown took to signing the band. After three albums with Facedown is when they signed with Razor & Tie, though there is very little talk about how they came to make that decision.

My favorite part of the documentary was hearing how the band members talked about each other. They ribbed each other now and again, but at the core, you can see how valuable each individual band member and crew member is to everybody else. These guys really seem like dear friends, and it's because they are. There's a lot of love and joy and fellowship to be found amongst the For Today camp, and it's really encouraging and inspiring to watch. In addition to the documentary, there's a short feature about the type of equipment that the band uses during live shows (which should appeal mostly to musicians or those interested in the technical aspects of a concert), as well as all six For Today music videos, from "Agape" to the latest, "Foundation." (Side note: I liked that the band was repping Come&Live! a lot with their apparel, and the inclusion of a song from The Glorious Unseen during a portion of the documentary was pretty sweet.)

Seeing the band go from humble beginnings with no intention of going huge to actually going huge is very cool, and it shows that hard work and an obedience to God's will can take you places that you never thought you'd go. For Today is an incredible band with amazing hearts for ministry and reaching people for Jesus, and they have fantastic music on top of it all. If you picked up Immortal and loved it, the audio portion of Prevailer will be a tasty treat for you. If you're a big fan of the band, or a new fan who wants to know more, the documentary will be perfect for you. Either way, there's little reason for you to not pick this up. And make sure to catch them on tour when they come to your area so you can experience them in person as well.

- Preview Review date: 2/19/13, Review date: 3/25/13, written by Scott Fryberger of Jesusfreakhideout.com class="coversize" align=right> Early Thoughts...
With a brand new record label, and a huge push in momentum, Spirit-filled hardcore group For Today released what is arguably their best album in Immortal last year. To follow it up, the boys are releasing an EP/DVD combo pack called Prevailer. Four of the five tracks are brand new recordings and are tough and vicious, while still presenting the Gospel and the band's humility. Ex-In the Midst of Lions guitarist Sam Penner fits in fantastically as the new rhythm guitarist, as the boys sound like they've improved even more since Immortal. The fifth song, an acoustic rendition of "Fearless" is an enticing addition to the tracklist, but unfortunately does not fair as well as I had wished. Still, it's a unique and unexpected offering from the hardcore crew. This drops in early April, so if you loved Immortal, then make sure to mark Prevailer on your calendar... - Preview Review date: 2/19/13, written by Scott Fryberger of Jesusfreakhideout.com --->