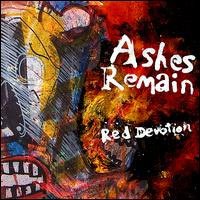 
Despite releasing their major label debut, What I've Become in 2011, Ashes Remain have been active in the indie realm since 2001. They released a couple of LPs in 2003 and 2007 and then one EP called Red Devotion in 2009. Seeing as this was their final indie release prior to What I've Become, it makes sense that the music here sounds similar to what can be found on that album.

"All Your Faces" is the first track to kick things off and it serves as a resonably well-executed rock song. Despite being lackluster overall, the electric guitar work is pretty stellar, particularly the guitar solos towards the end, while the screams at the song's midpoint seem a bit strained. "Save Me" is a bit of a quieter rock song that follows and it uses the exact same pattern as the one preceding it. The only difference is that this one is handled a bit better and is a more memorable track.

After the first two songs, the best of this EP come next as Ashes Remain serve up two rather effective ballads. "Broken One" includes some impressive vocal work from Josh Smith and has some refreshingly honest lyrics; "I don't need You / but I need You to know that I need You so much cause' I am, the broken one, the fallen son / Rising to breath in Your touch." While these lyrics are familiar, they are nonetheless utilized rather well here. Next up is "In Too Deep" which is the slowest song on the album and is also just as impressive as "Broken One." The lyrics speaking of someone who feels like they have lost all hope and then finding peace in the arms of Jesus are effective and very relatable as well. The final track is another rock song that encourages the listener to "Hold On, Move On" and is a good closer to this rather short EP.

While the first two songs on this EP are not as impressive as they could've been, the rest are rather impressive and give a preview to what Ashes Remain would sound like in 2011. The ironic thing here though is that while they wish to be known as a rock band, they sound the best when they are singing ballads. The same was true on their major label debut as well. So while those looking for something more innovative may want to pass on this EP, any fan of Ashes Remain's major label debut should definitely pick this one up.