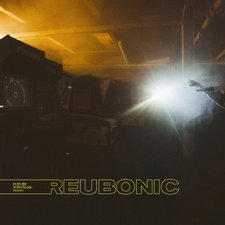 
After his 2010 best-of compilation, the long-beloved John Reuben had been nearly silent for six years (the only exception being a cover of Family Force 5's "Love Addict" on the Gotee Records 20th Anniversary compilation, Twenty Years Brand New). But in 2016, he ended the hiatus with his first two singles in seven years, "Old As Religion" and "Angels & Drums," and in March was featured as a guest artist on MercyMe's album, Lifer. After all that, and with all the pieces seemingly in place, Reuben finally announced last month the release of Reubonic. With a lot to love, quite a bit to chew on, and a little to question, this is an album that deserves some attention.

It's hard to wrap one's mind around just how different releasing a Christian rap album in 2017 is compared to 2009, not to mention 2000 when Reuben released his first album on Gotee Records. Reuben originally gained his popularity thanks to his thoughtful lyrics, combined with his unique blend of pop/rock and hip-hop. His rapping ability was never truly his strong suit, but he made up for it with a distinct flow and personality. However, in a hip-hop-saturated 2017, it is hard to see his typical approach having as much of an appeal to modern hip-hop audiences. So, naturally, he crafted Reubonic to feel like a modern hip-hop album. Musically, its beats are quicker and more processed and spotted with some eerie, hollow-sounding production reminiscent of something you could hear from Reach Records. Songs like "Age of Our Fathers," "Future Nostalgia," and "Candy-Coated Razor Blades" in particular are good examples of this shift. Reuben himself takes on some more sophisticated and nuanced raps than his borderline conversational approach of yesteryear. While it sometimes feels alien to hear Reuben trying to show off his ability to rap fast or drop some clever wordplay, it might be for the best that he has chosen to update himself (although songs like "We Live Best" and "One Drink Johnny" simply drip with old-school Reuben flavors).

Reuben's strongest appeal has been his complex and subversive commentaries, though his albums have always had their balance checked by his fun side and pop appeal. However, the independently-made Reubonic feels no need to check that balance, and the result is something which is unabashedly cynical. It feels like what one might imagine his unrealized side-project (which he had planned prior to the release of his 2005 album, The Boy vs. The Cynic -- which was ultimately a merger of two projects) felt like. The very opening line of "Bury This Verse" is "They say the best art comes from an unhealthy place / So this will be the last record that I ever make," which firmly sets the tone for the album. "Bury This Verse" proceeds to address depression, isolation, fear, censorship, and emotional suppression in what is probably the darkest song Reuben has ever released. His use of the "S" word in both this song and the next fit into the tone Reuben is creating, but the inclusion of these profanities is a decision which is fair to question, no matter how well they fit this project's tone. Meanwhile, "Age Of Our Fathers" feels like quintessential Reuben-esque cynicism in how he addresses the relationship between emotion, tradition and religion, while "We Live Best" contains yet more biting pessimism in lines like, "We can talk about the good life, but I don't think that it exists / We live best close to death." While the tone is pretty overwhelming, and will surely turn off both older fans who preferred his lighter stuff, as well as newer listeners who aren't looking for it, those who can stomach it will have almost endless sustenance for their own thoughtful inner cynic.

I am glad Reuben elected to end his silence, and Reubonic feels like an album that he has always wanted to create. There is more than enough pent-up frustrations present to cover the eight-year gap, and I'm sure he even left some behind in the process. I do think the album ultimately could have benefitted by being a little less heavy-handed in some areas, and Reuben doesn't really offer any resolution for most of his cynical explorations. However, the ultimate result is an album with great depth that lends itself quite well to repeat listens for those who can buy into his approach. The profanities will rightly turn many people off even if they are on board with the concept behind the project, but everything else here is worth checking out.

With such a large gap (8 years) between his last release and this one, long time fans had no idea what to expect when hearing the surprise news of a new John Reuben release. Would we get more of the same, or would we hear an evolved version of the one who promised to keep it "innovative"? What we get is Reubonic--a mix of the tradmark Reuben wit and a more modern sound to fit the ear of the rap music listener of 2017. This reviewer found the second half of the album the most interesting with "We Live Best," "Fallen," "Identity" and "One Drink Johnny" being among the highlights. In fact, the album really could have started with "Age of Our Fathers" and moved on from there without missing anything vital. The overall tone of the album leaves the listener feeling heavy, and it could have used some of the goofy charm that early Reuben was best known for. Unfortunately, though, by and large unchecked cynicism abounds and the humor is noticeably absent. With all this being said, John Reuben still has important things to say, and he now says them with an updated sound and flow. Too bad the controversy surrounding John Reuben's use of profanity on Reubonic has overshadowed what really is otherwise a solid release. This reviewer is hoping he continues to make music, and find a little bit of that hope to rap about along the way. - 5/28/17 Josh Balogh

Reubonic is an album that takes a lot of digestion. At the surface, John Reuben provides some signature raps and a buffet's worth of experimental music and beats that can still qualify as hip hop. "Fallen" and "One Drink Johnny" feature my favorite pieces of music, but the haunting child chorus and lone violin in "Old As Religion" makes for a strong contender. At its core, this album doubles as Reuben's manifesto on his weariness and frustration toward things like the music industry and even faith. If you were expecting the bubbly John Reuben like the days of old, throw those expectations out the window and hold on tight for a grittier album. - 6/24/17, Scott Fryberger of Jesusfreakhideout.com