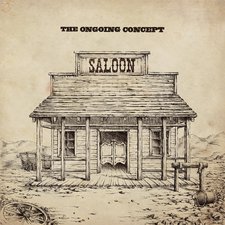 Solid State Records have had a strong resurgence in the past couple years. Their newest act, The Ongoing Concept, is another impressive newcomer. Their debut album, Saloon, is a strange rollercoaster ride that is part screaming metal, part grooving hard rock, and part Wild West. Not since Showbread's No Sir, Nihilism Is Not Practical have I been so puzzled by what I had just heard, but been so mesmerized and impressed at the same time.

After a brief spoken word opener, that appears to end in an old west bar fight, "Saloon" kicks things into high gear with full-on metal mayhem. It only takes 23 seconds before you realize that TOC isn't your typical metal band. The guitars drop and a piano comes in with a typical western movie saloon piano part. Soon, the guitar comes back and is played in unison with the piano. Only a minute into the track and it changes again with softer piano leading to a more melodic rock section, but soon shifts back to the screaming metal heard at the beginning. TOC delivers all of this diversity and it's only the first song. This type of mixture holds throughout the entire record and often changes at a similar rapid pace within the same song. If I were to give a full play by play of every song, you'd be reading this review all day; we will hit the highlights only instead.

The acoustic opening to "Little Situation" gives way to a groove that will be stuck in your head for hours after listening and has a super catchy and singable chorus. Rock and metal fans should both find plenty to like in this ditty. After the first five songs pound you with metal, hard rock, and plenty of screaming, "Sidelines" begins. This piano ballad is so far out of place with the dissonance of the previous tracks, yet somehow blends perfectly into place. It's a beautiful song in the midst of the madness that even the strictest of metal heads will likely find themselves singing along.

"Failures and Fakes" is the second song released from the album (After "Cover Girl"). It's another solidly blended track of metal and hard rock and is easily an album favorite. What really sets it off musically is the blasting B3 sound heard throughout. The heaviest track on Saloon is a toss-up between "Like Autumn" and "Class of Twenty-Ten." The former has a keyboard riff that repeats through the metal guitars and the latter features an amusing lyric section in the first part. In spoken word he says, "But I do know if you do hear this song you're going to call me up and say, 'Michael what's wrong is everything OK' and I'm going to tell you this..." and follows it up with a screamed, "No! It's not OK!" Things finally come to a close with "Goodbye, So Long My Love." The band almost channel John Mayer in a sense with the soulful nature of the music and vocals, but quickly change it up with a darker, minor tone in the music and vocals that sound as if someone is screaming for their life in a horror movie. The music calms to a very slow pace at the end with nice female vocals taking lead. As the song fades out, you have nothing to do but sit back and wonder what in the world just happened.

To compare The Ongoing Concept directly to Showbread wouldn't necessarily be accurate, but it's hard not to think of Showbread when you hear the higher pitched screamed vocals or the off-the-wall diversity and stylistic changes from minute-to-minute. Saloon is quite possibly the most diverse and best overall sounding "metal" album to come out in quite some time. Though it's hard to classify these guys as solely a metal band, it really is the best category to put them into. If you want to hear some true creativity and diversity, The Ongoing Concept have more than delivered on their debut album. Grabbing this record as soon as possible would be an excellent plan.

Longtime Solid State fans will probably remember the band Once Nothing, an act who took metalcore and added a distinct Western tinge to it. It was a lot of fun, but they broke up not long after. Now, they have a spiritual successor of sorts with a brand new act, The Ongoing Concept, and boy are they fun. This is breakneck, all stops out metalcore with just the right amount of country western swagger. It's hard not to break into a smile after hearing the first thirty seconds of "Cover Girl." While the band isn't instrumentally very unique, they make up for it with speed, attitude, and a really solid and diverse vocal approach. Their free-wheeling vocal and lyrical style reminded me a lot of classic Showbread. Thankfully, the western saloon-style touches (like the occasional banjo and honky tonk piano) legitimately add to the music and don't seem gimmicky. The Solid State band lineup of late has been a little stale, so we can be thankful for The Ongoing Concept taking it up a notch with their off-the-wall yet extremely fun music. - Timothy Estabrooks, 8/24/13