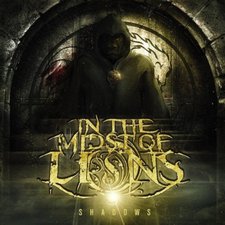 In The Midst Of Lions
Shadows

In the Midst of Lions follows up a solid album, The Heart of Man, with a mixed bag in Shadows. Most of the album feels like a direct continuation of their previous effort which showed some promise of possibly breaking the deathcore mold. Instead of continuing down that path, they settle for a repeat.

Don't get me wrong. I understand ITMOL is in a sub-genre of metal that relies on breakdowns, blast beats, and ferocious growls, but the hope is that a band will improve and not stay in the same spot. The biggest change here is in the vocals. The high-pitched screams are basically absent. One of the positive factors in The Heart of Man was the battle of vocal styles throughout the album. Other than in "Cry of the Oppressed," and a couple of other instances, the high-pitched vocals are only used on top of the growls. Another detractor is the fact that the album pretty much feels like one long 31-minute track. This is not in a good "Hope for the Dying's Dissimulation" kind of way either; it's more of an "every song pretty much sounds exactly the same" kind of way.

The two biggest positives are the guitars and the message. ITMOL continues to bring their message of Christ without abandon. This is a welcome similarity of their previous work. "False Idols" is a particularly good look at today's society who tends to put everything before God as the song starts, "Look as they worship; these are false gods not worthy of attention. Wealth and possessions; a golden calf. Smash your idols! Destroy distraction!" When you step outside of the normal guitar chugging and breakdowns, the guitars are good enough to make you smile and keep you interested. There is nothing mind-blowing or overly technical, but solid runs and fills are throughout. Songs like "The Call" especially stand out with the shrieking harmonics between the chorus and verse. The solo near the end of "One For All" is also noteworthy.

While the album is not exactly what I was hoping for from a progression standpoint, it isn't all bad. The band seems to know what they are good at and wish to stick to it. Unfortunately, it comes at the price of redundancy in sound. If you do not have The Heart of Man, you will probably enjoy Shadows a little better than one who does. If you can't get enough deathcore, or bands like Meshuggah, this may be a worthy addition to your collection. If you are looking for the next big breakthrough in the genre, you may want to look elsewhere. Whatever your decision may be, this reviewer strongly recommends checking out "False Idols;" it is a good listen for any metal fan and contains an extremely relevant message.

By now, St. Louis, MO's In The Midst Of Lions can be counted on to deliver one thing, in spades: pummeling deathcore powered by an onslaught of off-kilter breakdowns. Granted, this is ITMOL's forte, and kudos to the band for sticking to their strengths, but I was really looking forward to hearing this record mainly to see what else this heavier-than-a-ton-of-bricks outfit could come up with after the very slight musical progression of The Heart of Man. So the question remains: Is Shadows ITMOL's big break from slightly-better-than-average into something extraordinary, which they so desperately need? Eh... maybe. The production is better, the delivery more intense, but, at the end of the day, there's not a whole lot of musical progression from their previous work; Shadows, at times, plays like The Heart of Man 2 or even Out of Darkness 3. To qualify, though, I will say that as the sound quality, production, and execution on Shadows far surpasses their previous work, this would be the go-to album for an introduction to ITMOL; "New Beginnings" and "One For All" stand out as some of the band's finest explorations to date. On the whole, Shadows is definitely a crowd pleaser for the pit, so if you're big on breakdowns galore behind Spirit-filled lyrics, this could be the disc for you. However, if In The Midst Of Lions could take a few more steps out of their comfort zone and incorporate some more innovation into their signature sound, they'd have a incredibly promising future and a much longer shelf life. - Review date: 11/14/11, written by Steven Powless of Jesusfreakhideout.com