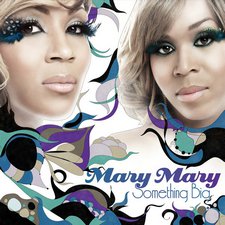 The Gospel duo Mary Mary is comprised of sisters Erica and Tina Campbell. These two have been around for over a decade making albums and even gathering a few GRAMMYs along the way. While I'm typically not a fan of gospel music, their song "Something Bigger" has enough R&B, hip-hop, and even a little jazz to make me curious enough about the album to look into it.

When I first gave the record a listen I got exactly what I expected: straight-up gospel. The opening title track, "Something Big," blares the greatness of Jesus over a hand clapping gospel tune, which I actually found myself rather enjoying. Up next is "Something Bigger," which delivers an even faster paced song garnering a reggae feel about living "big" for the Lord. Again, another good song. Somewhere near the middle of the album is "Walking," a solid listen that incorporates gospel with turntable scratches. Near the end of the record is "Sitting With Me," which has the group singing of the reality of being alienated as a Christian in a song filled with good energy and flow that goes perfectly with the story being told.

While listening, you'll catch some thought-provoking lyrics such as "at my best, I'm still my greatest enemy" from "Catch Me" and nice worshipful songs like "Homecoming Glory" and a good rendition of the classic hymn "It Is Well." Despite the strengths, the album does have a few touches of mediocrity as well, unfortunately. "Never Wave My Flag" is full of good beats, but the hooks are weak, while "Survive" may have been best being omitted from the album entirely. Both "Blind" and "Are You Ready" are decent listens, but nothing spectacular either.

All in all, Mary Mary's Something Big is much better and more diverse than expected. The entire album is focused on God and its production flows wonderfully over good lyrical content. All fans of gospel will be flocking to pick this up, but I would recommend some R&B and even hip-hop fans to give this album quite a few spins this year.