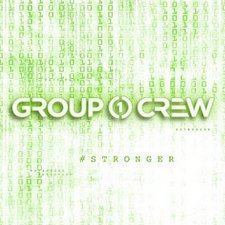 In the absence of Pablo and Blanca, Manwell Reyes continues to press on, releasing the second Group 1 Crew EP since Blanca's departure. The first EP, #Faster, displayed a band that was struggling to find an identity, bringing in a plethora of talented guest appearances to attempt to offset that. #Stronger fares quite a bit better than its predecessor, but some of the weaknesses are still apparent.

"Keep Goin'" starts things off with a bubbly synthesizer and fluid rapping from Manwell. The CCM styled hip-hop in the verses transitions to a Capital Kings-led EDM chorus. The lyrics in the chorus are a little cliché, but the irresistible dance vibe makes this flaw largely forgivable. On the piano driven "Star Track," Josh Zegan (formerly of post-grunge band Dizmas) leads an R&B flavored chorus. It's a laid back song that occasionally takes it up a notch with an explosive electronic post-chorus. It's hard to tell if the Star Trek references are meant to be funny or serious, but whatever the intention the song, it shows some of the corniest lyrics on the EP: "we boldly going where no one's been, that's star track."

The upbeat "Rise from the Ashes" is stylistically the most CCM'y song on this 18-minute album. Manwell's voice shines here as he reminds us of God's promise to never leave us. "Award" brings in former Press Play vocalist and active solo artist Paige Bryan in the chorus and bridge. The verses of "Award" have a piano over a light hip-hop beat, while the chorus has synths and strings over a dance beat. Though the lyrics are solid, the concept of the song, of God receiving an award, is simply too cheesy.

Group 1 Crew saves the best for last on this EP. "Elevator" brings a more serious tone than the rest of the songs, largely aided by delicate keys and audacious lyrics like "You pray and honestly you feel like that's enough / well ask a hungry man if prayer can fill his belly up / before you crucify my view make sure you understand / I love to pray but also feel like I should lend a hand," which call scriptures like James 1:22 to mind. The song even gets pretty vulnerable as Manwell opens up about internal struggles with selfish motivation. After the two-minute-long first verse, the song turns into a full-fledged rap song with fast-paced spitting and hefty bass.

Where #Faster felt like Group 1 Crew was trying too hard to fill a void with guest vocalists, #Stronger feels like a more natural progression of their sound. Additionally, Manwell seems more comfortable in his new role as he has skillful rapping and singing throughout the album. Though there are a few imperfections here, the energy level is high and truth of God's love and grace comes across well through the music and lyrics, making this an album that you should consider looking into.