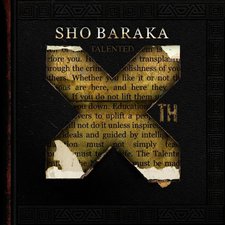 Sho Baraka left Reach Records to form his own label in 2011. The first record he released was with the hip-hop group known as the High Society Collective, but now, in 2013 he is releasing his first solo album since 2010's Lions and Liars. His newest effort, Talented 10th, is a concept album. The album title comes from a phrase coined by the American Baptist Home Mission Society and used by civil rights activist W.E.B. DuBois to describe the likelihood of one in ten black men becoming leaders in their race among the world. DuBois believed blacks needed a classical education to reach their full potential instead of the ideals agreed upon in the Atlanta Compromise (blacks would work and submit to white rule in order to receive a basic education). This seems like common sense today, but was very forward thinking for early 1900's America. Just a quick look at the background of the album title and concept should give you a hint of what the album is about and that it's mainly geared towards the black community and culture.

The album opens nicely with "Bethesda," as it is definitely one of the top tracks. After a good opening track, the album gets a little dicey. "Ali" is a decent song as well, but Sho doesn't really hit it out of the park until "Peter Pan." "Peter Pan" tells a two-sided story to a jazz piano background: The main character and hip-hop. It starts with the story's subject falling in love with a rapper that would be an influence for several years while growing up. He quotes his favorite song from this artist as, "You got money get your hands in the air." Sho explains how things started to change in college after giving his life to the Lord. He then tells of becoming a man and the nonsense that his once-favorite rapper is still spitting and leaves the listener with the final thought, "Hip-hop, you're close to 50. When can we grow up?" "Cliff and Clair" (a Cosby Show reference) is another good storytelling track. Sho tells the story of Cliff and Clair who meet with large aspirations, start dating, and get married. The story moves along as Cliff and Clair become parents and start growing apart as a couple. In the final chapter of the story, Cliff and Clair take to counseling and start working on the problems within their marriage. The song contains some solid advice to common marital problems found in today's Christian couples.

Moving back a couple of songs, Sho gets deep into racial issues, but the message comes out in an offensive manner. "Jim Crow" (an obvious reference to the pre-1966, separate-but-equal, Jim Crow segregation laws), is Sho's attempt at satire. The lyrics start on a positive note with, "I feel I'm trapped in a crazy place asking the Lord for amazing grace. I see the masses want to change me; I'm waiting for someone to save me. Until then", but quickly turn sour with the follow-up line, "I guess I'm stuck here on n**** island. Yeah, where n***** be whilin'. Yeah, and color is violence. Yeah, a moment of silence." Sho gets into his message stating that, "Too many people think that racism is past tense," but what he is describing is much deeper than your average racist. Sho claims, "Hollywood wants to pimp us to get dough, exploit us but give us money," and follows that up almost immediately with, "Or be a magic negro until the day I'm gone; help the white man reach his goal, but never reach my own." As Sho continues to describe the ignorance of the world he says with a slight chuckle, "Instead of truth they'd rather be duped. I guess they want me to make more songs for youth groups. Until then..." After attempting to make his point using different racial slurs, Sho drops this on the listener, "That lady you call ho, that's my lover. That woman you call b****, that's my mother. Them boys that you killed, them my brothers." Sho isn't quite done with the offensive content and he closes the song with, "Here we are put on a show, dance a jig go Jim Crow. Here we are put on a show, dance a jig go monkey go." While racism is certainly not dead, Sho chooses to focus on white men who are racist against black men only. There is racism all over the world today with many different races; it's a shame that such a forward and bold song didn't capture the issue as a whole. Perhaps the most offensive part of the entire song isn't the ugly words Sho uses, but the fact that he states that black men are used only to be exploited by white men and to help them reach their goals. Sho paints with a very broad and hurtful brush. Perhaps it should be hurtful to some, but it should not be all-encompassing. Instead, "Jim Crow" takes a very direct approach and does not seem to allow for any room other than Sho's stance.

Overall, Talented 10th is a mediocre release that is written heavily for a particular audience. There's nothing wrong with being proud of your racial heritage, or writing songs about it, but in doing so, one runs the risk of alienating others. The album falls short of the work that Sho Baraka has done on Reach Records or with the 116 Clique. There are indeed a few tracks worthy of repeating, but the album as a whole comes up short. Sadly, this is typical with concept albums; they are usually either a home run or a strike out. A pedestrian record coupled with some highly offensive and unnecessary lyrics may leave a bitter taste in your mouth. Sho is capable of better writing and accomplishing his thoughts without abrasive language. If you are a Sho Baraka fan, you will have to listen and decide for yourself. For me, a fan who had ideas of this being 2013's top hip-hop album, it's a major disappointment.

Despite being a lesser-known name in Christian hip hop for a few years, former Reach Records rapper Sho Baraka has been going strong since leaving the label, dropping an album with High Society Collective and still another with Hello Revolution - both last year. In 2013, Sho is looking to start off strong with his third album, and first solo independent album, Talented 10th. Inspired by a recent trip to Africa, Sho's resolve is stronger and on Talented 10th, he's grinding harder and is on the top of his rap game, as evidenced in the laidback, yet fiery, opener, "Bethesda," as well as later tracks such as "Mahalia" and "Mrs...," the latter of which reminds me of Red Hot Chili Peppers' cover of "Rollercoaster of Love." Lyrically, Talented 10th is heavy, as Sho focuses on the darkness of our culture in relation to ignorance, racism, hatred, etc. There's a lot of depth here, begging for the listener to not merely take what they hear at face value and for the listener to dive in and dig. In some cases, only members of the black culture may get something from the message of the song, while in other cases, the message is universal. As far as universal messages, one of the hardest hitting lines your soul might feel (or maybe one of the most relevant to modern Christianity) comes in the track "ME!" when Sho says "I know Jesus, the holy and true King, I'm too busy trying to make Him a cool thing." So many of us try to make Jesus appealing by conforming Him to the current culture trends, when Jesus isn't interested in being cool, but rather is interested in loving us and changing the hearts of men. Sho's also not afraid to be blunt in order to get his point across. No doubt traditional Christian rap fans will be taken aback by the track "Jim Crow." It's a satirical look at how the black culture is still under some racist oppression today, and uses a few strong words in order to grab the listener and make them re-evaluate the way they look at the subject. Some will find it unnecessary, and some will find themselves taking a step back and thinking. There's so much depth to Talented 10th that a review couldn't cover it all without taking a liberal amount of space. Check out Sho Baraka's latest offering, and see if you don't go back to each track and try to get something new out of it again. - Scott Fryberger, 1/11/13