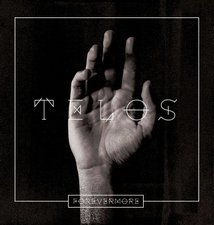 Brandon Ebel's Solid State Records continues to impress with some of the best metal music in the business. Their current roster is stacked with top notch talent and the newest member to join the fold is Forevermore. Joining a label that houses the likes of Becoming the Archetype, Demon Hunter, August Burns Red, and the legendary Living Sacrifice automatically comes with big expectations. Forevermore delivers the goods with their label debut, Telos. While these rookies haven't set any new benchmarks in metal, they're by no means a slouch.

"Force Fed" pops the cork on the record as a nice headbanger. It doesn't take long before you're bobbing along with the chorus's chunky guitars and screams of, "Force fed lies. Force fed failures. Force fed dreams that fall apart." The most enjoyable part of the musicality is that the band allows it to breathe. At times you get just an ambient hum with a guitar lead that lets things open up a bit before dropping back into the heavier music. "The Great Divide" serves as a worthy follow-up to the opener and the eerie keyboard that plays over the guitars after the first verse really grabs your attention. The record's best track, arguably, hits at the half-way mark with "Lackluster," but "State of Gold" is definitely in the argument with its small, but tasty, guitar sweeps. Forevermore does an admirable job of making each song stand out as an individual track. Musically, the keyboards, perfectly timed ambience, and the open sections that allow the guitar leads to ring clear are just pure ear candy. The changes in strumming tempo on the guitars themselves keep tracks like "Bitter Sweet" interesting and entertaining. The haunting, but minimalistic, guitar lead over "Paper Word" is another win. Just when you think you've heard everything they have to offer, Forevermore change it up yet again about two minutes into "The Wager." The instrumental break there isn't anything overly impressive, but it just serves as another layer as to what's available musically on this album. The final piece of the puzzle -- one that you're probably thinking is missing -- is the clean vocals found in the album closer, "Harbor Lights." That track also features a simple, but enjoyable, albeit brief, instrumental break at the 2:21 mark.

Forevermore have a lot to offer metal fans in Telos. It's certainly not the greatest metal album I've heard and it's not even the greatest debut I've heard, but it is a really, really solid release. This group is already doing things that it takes other metal bands years to do with their experimentation and varying sounds. The band isn't relying on the old metal basics to push them, though those qualities are present, but are allowing their creativity and diversity to drive them. I wouldn't call the musicianship superior, but it's better than a lot of bands and there isn't one particular aspect that stands out as lacking. Forevermore have some stout competition by releasing their album the same day as metalcore stalwarts War of Ages' stellar release, Supreme Chaos, but Telos can definitely compete. While 2014 has been a subpar year for the metal genre in general, July 22nd should be considered a pretty amazing day for metal fans.