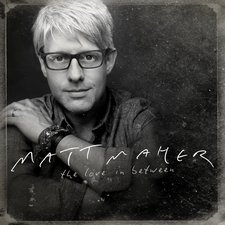 Matt Maher
The Love In Between

Matt Maher's The Love In Between probably had Christian music fans on their toes for a while, but if those who waited for its arrival weren't fans of his earlier projects, this new one doesn't promise too much in the way of progress. On the bright side, it's a step in the right direction.

The album kickstarts with "Rise Up," which is one of the stronger songs on the album. There are other highlights as well, but this song promises too soon that the remainder of the album will have some solid stability, which isn't exactly the case. Next is "Turn Around," a decent southern influenced track about the simplicity of finding Jesus. After that comes "Heaven Help Me;" there aren't any major problems with the song, it's just too blasé in comparison to what's preceded it. The lyrics for this song's verse are: "I don't want to live tomorrow/ For another rainy day/ I don't want to say I'm sorry/ If I can't avoid the pain." Though it helps that Maher didn't compose solely worship songs (not because strict worship is bad, but because sometimes we need to feel grounded on earth before we can look up to God), and ventured to write about some different topics, he didn't explore those surrounding themes as much as he could have. "Every Little Prison" follows, which again, is not a bad song at all but just nothing too memorable, while "Woke Up In America" is a salute to being born in a great country when others aren't so fortunate. I understand what he was aiming for, but it ends up feeling a little uninspired. I believe that it is a major responsibility for artists making music for Christ to be a voice for their fellow Christians. With that said, not many people are priviledged with that responsibility and there is a noticeable difference between heartfelt, quality work and rushed, dutiful work. It shows and it speaks volumes, because words--good or bad--are a powerful thing.

"Heaven And Earth" is another highlight on The Love In Between; it's one of the more impactful songs of the bunch. "On My Way" is a fun song like "Turn Around." While nothing extraordinary, it might keep the listener interested. "My Only Love" is my personal favorite on the album, where Maher takes a sort of Burlap To Cashmere approach. I would have loved to hear some more heartfelt songs like this one on this record. The last two songs, "Everything and Nothing" and "The Spirit and The Bride," follow this same pattern as well.

For people who are familiar with Matt Maher's past work, The Love In Between might be a step towards a better sound for the singer/songwriter. For readers who have never heard of him, definitely still check this album out. You may enjoy it, but if you're a bit pickier about quality, this might not do it for you. I look forward to the hopeful progression of Maher's next album.

In the past, worship artist Matt Maher's releases all had the well-worn tone of many Contemporary Christian albums. His latest effort, The Love In Between, surprisingly breaks away from being classified as a straightforward worship album. While it includes softer worship and contemporary tracks, other genre accents can also be found. The southern gem "On My Way" is definitely an album standout, and there are even a few more country-influenced tracks ("Woke Up in America," not only has a chorus reminiscent of a country song, it even includes the mandated patriotic references). Although it is refreshing to hear a harmonica solo or a piano driven song, for the most part Maher is still CCM focused. Some of the album's worship songs stand out, specifically "Every Little Prison," and "The Spirit and the Bride," but the rest are not particularly groundbreaking. The Love in Between contains quite a bit of filler. While Maher should be commended for not producing yet another strictly worship album, what he does offer this time around cannot be considered remarkable. - Samantha Schaumberg, 9/18/11