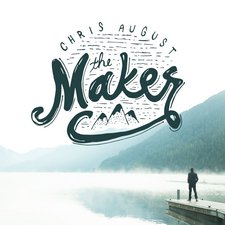 
Chris August is on his third album. It's a simple sentence, but it's the best and most succint way to describe The Maker.

When we last left Chris August with The Upside of Down, his artistic work comprised of simple lessons turned into songs, implementing straightforward, blog-style lyrics for the majority of the material. It's the style that groups like Casting Crowns (and to a lesser extent, Sanctus Real) built their career on, and not surprisingly, more and more artists--including August--have used this approach. In 2015, The Maker mostly follows this same approach to a tee, and depending on one's familiarity with August's range of work, this is either business as usual or another step in the direction of mundane.

The issue has never been that these songs weren't truthful, but more that they really don't operate well as individual works of art. We first heard this approach with "7x70" on August's debut No Far Away, which was admittedly a mostly compelling track, but The Upside of Down seemed to attempt replicating this same approach for the nearly the whole album, and The Maker is not much different. It's this safe territory that's simply difficult to comment on; "He's Still Here," "Drop Your Stone," "Paradise," "Gotta Be a Change," "Find You To Find Me" and "Just the Same" all blur together in their sameness. What's potentially the worst aspect of this problem is that these end up being tracks that anyone else could perform to the same degree.

It's only in a few moments in the album where August gets to really shine as his unique self. "I'm In Love With You," "Superhero," "Muddy Waters," "Something," and the minute-long ending to "Find You To Find Me" all feel like August in his best element, channeling his soul-inspired pop sensibilities. The caveat to it all is that artists like Jon McLaughlin (and even Ed Sheeran and John Mayer to some extent) seem to achieve this sound more convincingly, but it's still refreshing to see August operate in the gear he's made to run on. But again, these moments are oh so few, and it really affects the value of The Maker as an album meant to last.

Three albums in, Chris August should have a clearly defined method to his approaches, though at the moment, albums like The Maker don't seem to display much growth or experimentation. As fine as a debut No Far Away was, there's still so much further August could go. It seems as though this is the type of artist that August has decided to become, though it's all still subject to change. For now, August stays the course, and that's the main takeaway from The Maker.