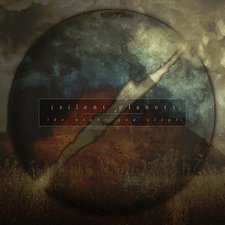 In the last decade (that is, the early 2000's), Solid State Records added a lot of newcomers to their roster, filling in the gaps left by groups like Training For Utopia, Blindside, Society's Finest, etc. For the rest of the decade (and slightly beyond), Solid State was ruled by the likes of Underoath, Haste the Day, Norma Jean, Oh Sleeper, The Chariot, August Burns Red, and more. Now, many of those bands have either gone independent, switched record labels, or broken up, leaving a new breed of artists to come in, just like their ancestors before them. Today's Solid State looks like Wolves at the Gate, Fit For A King, The Ongoing Concept, and the label's latest (and very promising) signing, Silent Planet, whose label debut is a meaty album that deserves your attention.

It probably goes without saying, but a title like The Night God Slept has potential to make a faithful Christian say "Wait...what?" Don't worry, I said it too. But when you realize the album is a story about a personal struggle with God, it begins to make sense. The album is somewhat of a concept album, though it seems to be more about actual historical events from different time periods and/or places around the world (and in an interesting twist on the concept of the lyric booklet, the band put references for particular portions of their lyrics. These references are marked with lowercase Roman numerals, and credit various sources - anything from American history to Scripture to Edgar Allen Poe to various bands that may have inspired the lyrics).

The first song released from the album was "XX (City Grave)." It's a not-so-subtle song about pornography. It's not so much a song about "Don't watch pornography because the Bible says that's the same as adultery" (although true), but rather, it cuts straight to the issue of the women in the porn who feel locked inside a prison. While the song does reflect on the watcher ("Apathy was our anchor to a digital sea where you drown in the comfort of our complicity"), it also chronicles the hopelessness that some of these women feel as mere sex objects ("But God, are You a man? Then how do You see me, from where You sit up in Heaven, looking down on my hell? My body chokes back, 'I have nothing to draw with and the well is deep, where can I get living water?'"). Next, "Native Blood" examines the overwhelming loss of Native American life in the supposed name of Jesus; it uses rather poignant lyrics such as "Pretend it's a house of peace while she's buried underneath, you built your Father's house over my mother's grave," as well as "The life I loved looking up at me, saplings struck like daggers hemorrhaging streams, as the breath of my people return to the ground, so forests can once more abound, the suffering cross that overcame, the name of love made concurrent with shame."

The album goes further with the historical crises and dark times. "Tiny Hands (Au Revoir)" tells the story of Madame Rouffanche, the lone survivor of a Nazi group's attack on some civilians in a church, while "Darkstrand (Hibakusha)" talks about the innocent lives lost during a pre-emptive American nuclear bombing of Japan, and "Wasteland (Vechnost)" goes into the ideals of Joseph Stalin (the song makes reference to a quote of his that says "The death of one man is a tragedy, the death of one million is a statistic") and his attempts to remove God from the USSR. Yes, The Night God Slept is rather dark, with a lot of talk of death and hopelessness, despite the references to Scripture all throughout. And sadly, it's all based on the realities of the world we live in. However, it's in the album's final moments that we find the hope. "Depths II" closes the album, and it has God saying "I am the fire that is never quenched, I am the river that will not run dry," followed shortly after by the lyrics (referencing Revelation 2:17) "This is the end of everything, we'll lose our divisions and forget our names, the precipice of eternity, I caught fire and you'll watch me burn." Despite the dark times, it's really great to be reminded that redemption is coming, and perfection is on its way.

And of course, there's more to the album than just the story/lyrics. For those wondering just what this band sounds like, rest assured that Solid State is continuing its trend of signing high quality artists, and even then, Silent Planet is amidst the best of them. The band has almost tapped in to some of Oh Sleeper's creative ability, with guitar licks and melodies that are sort of up that alley. Vocalist Garrett Russell has engaging screams, and is even able to articulate his points with well-written lyrics, and can enunciate his screamed words even when they are at the point of near tongue-twisters (sometimes fast, but it's not often). The band has been described by HM Magazine as capturing "a perfection of the metalcore genre," and that's not too far from the truth.

The Night God Slept is an excellent label debut; it's no wonder these guys caught Solid State's attention. With terrific storytelling (although I had a hard time with "First Mother (Lilith)," mostly because it's based on a fictional woman that supposedly was married to Adam in the Garden of Eden before God created Eve), and a sense of urgency to back up the stories they tell, Silent Planet is a band to keep on your radar for the future. Silent Planet is one of the best of Solid State's new breed.

Solid State Records newcomer Silent Planet have entered the scene with quite an impressive label debut. The Night God Slept may sound a little off putting, but within the concept of the album, it makes more sense. Silent Planet offer up a solid dose of metalcore, but as many of Solid State's other artists, they experiment beyond the normal grinding guitars and screaming vocals. Instead of a breakdown-riddled affair, the band offers up other type of breaks and use different effects, such as some electronics, to achieve them. The album's lyrical themes come from the darkest parts of humanity and at times it can almost be a bit too much. In fact, I can't think of a darker album since The Famine's last hoorah, Architects of Guilt. The biggest difference between The Famine's examination of the human dark side is that Silent Planet does offer some hope. The final track, "Depths II," sums up all of the darkness with the promise of God's overall plan and our future as believers. Musically and lyrically, the album, although dark, is solid all around. Perhaps the strangest addition is that of "First Mother (Lilith)." The lore (both actual and pop culture) of Lilith is fairly extensive: Adam's first wife, a demon, mother of vampires, and even a god. It's a little strange such a character gets credence in an album like this. Metal fans should be stoked about Silent Planet as The Night God Slept is a strong entry into this year's heavy music pool. Expect to love what you hear musically, but if you're looking for something uplifting, you're going to want to look elsewhere. - Review date: 11/14/14, Michael Weaver

After two EPs (2012's Come Wind, Come Weather and 2013's lastsleep 1944-1946), Silent Planet have finally released their first full-length record. They build off the sound that they established in Come Wind and lastsleep. Three songs off of the lastsleep ep make it to the full-length, which, on one hand, is a bit disappointing since this record has ten tracks (two being instrumentals) and three songs have already been released. Silent Planet have always been very intentional and eclectic with their lyrics, bringing to light topics and stories that some other artists don't touch on. In total, there are seven new tracks with lyrical content, and in those seven tracks, Silent Planet scream (and oftentimes sing) about hard-hitting issues: modern-day sex trafficking in America, the troubled history of Native Americans, and even a look at the contrast between the intentions of Christianity and how the world views Christianity and Christians. With The Night God Slept, Silent Planet sonically weaves in-and-out of crushing vocals, guitars and drums with somber and somewhat morose guitar tones and quiet vocals ("Tiny Hands" is a perfect example). This sort of music goes down a different road than standard metalcore, but it's a practice that Silent Planet have done well at mastering. The Night God Slept is a really fun, frantic and intentional record, and it's sure to gain a lot of noise for Silent Planet. - 11/13/14, Dylan Minson of Jesusfreakhideout.com