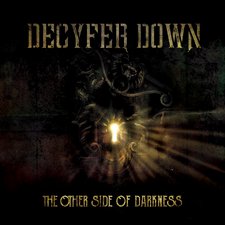 Decyfer Down
The Other Side of Darkness


Good Christian rock bands are a dying breed; many of them have been retiring or transitioning to a different sound, and few new ones have risen to the occasion. It seems only longtime rockers like Disciple and Skillet have any kind of significant presence in the Christian music industry--and they are being held on to for dear life by fans. Among this camp is Decyfer Down. The North Carolina-based band quickly established themselves as a Christian rock staple with their strong debut, End of Grey, in 2006 and a GRAMMY nod for their sophomore release, Crash. Soon after the release of their third album, Scarecrow, they went on an indefinite break--only to get a call two years later to play in the City RockFest in 2015. Now after a successful $30,000 crowdfunding campaign, they are ready to unleash The Other Side of Darkness.

Not only is Decyfer Down back with full force, but they've cranked it up a notch with monster guitar riffs, killer drum work, and TJ's strongest vocal performance to date. There are two types of songs here: faith-based rock anthems and emotional ballads. There is nothing in between. The track list is a standard layout of seven rock songs with three evenly spaced ballads, which is an appropriate balance for their straightforward musical approach. Decyfer Down has always been more about execution than originality, and their delivery here is stronger and more consistent than any of their albums since End of Grey.

"Rearrange" bursts right out of the gate as the most aggressive song on the record. It's a bold, in-your-face song that sets a no-nonsense tone for the album, challenging people who judge and oppose you to "rearrange" their perspective. The theme of this track stands apart from the rest of the album, which revolves around a desire to draw closer to Jesus and break free from sinful habits and poisonous relationships. The band maintains the rock onslaught with "Dead Skin" and "Nothing More," and only continues to impress with "Other Side of Darkness" and "Anchor Me." Soaring choruses, crunchy breakdowns, and furious drums (much of which are provided by Joey West of Disciple) abound in these tracks. There is also enough musical distinction and tempo variation to prevent these songs from running together. Though these songs showcase the band at their best, it's tough to say any of them will be individually as successful as "Fading" was back in 2009.

When the band slows things down on the piano-led "Believe In Me" and guitar-driven "Lifetime," they offer convincing power ballads with soft textures that builds in all the right places. These songs, though predictable, carry a strong melody and will have you singing along in no time. "Burn Back the Sun" stands out as differing from the other two ballads as it is driven by acoustic guitars and boasts a slower tempo. Any doubts fans might have of closing the record with the acoustic revisit of "Burn Back the Sun"--especially with only 10 tracks--will be put to rest as the song is fantastic. Despite its stripped down nature, this personal plea to God to stir up passion in an apathetic heart is exceptionally powerful.

With Crash feeling rushed and uneven and Scarecrow being a departure from their typical sound, The Other Side Of Darkness is the proper follow-up to the Caleb-led End of Grey. It's more straightforward modern rock than the post-grunge sound the band has largely been known for, but it's a solid rock album that holds up well over several dozen listens.

Decyfer Down is back again with The Other Side of Darkness, an album that casts aside any notion of the post-grunge of End of Grey and Crash, and embraces a hard modern rock sound.

"Rearrange" starts the album out on a heavy note with a track reminiscent of former Wind Up band Dust For Life's "Step Into the Light." The album rolls through some heavy riffs, with the intro to "Nothing More" being particularly tasty, before slowing down for the piano-led ballad "Believe In Me." From here, the album is a pretty decent back and forth between the heavier sounds, like "Anchor Me," and the softer, like "Lifetime." The album has ten tracks, but only nine are new. The album's closer is a call back to End of Grey with an acoustic rendition of "Burn Back the Sun." Typically, it would be a little disappointing to have such a short album include a reworked song, but the acoustic treatment gives it a fresh feel.

For one who is over post-grunge rock, The Other Side of Darkness is Decyfer Down's best work to date. For those still longing for the days when Caleb was at the helm instead of TJ, End of Grey will likely remain in your top spot. Either way, this album is a legitimate rock record. Hard rocking sounds, catchy riffs, and top-notch vocals. With this impressive return, one can only hope Decyfer Down is back to stay this time around. Too many Christian rock bands are dropping from the scene and DD seems to finally be coming into their own. - Review date: 3/31/16, Michael Weaver