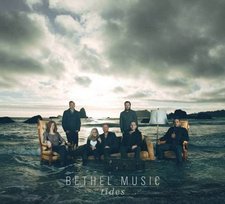 Tides is essentially an electronic worship record and the band along with its talented singers enter into new sonic territory. Fortunately, the Bethel Music team still manage to represent the spirit of their church movement, this time with slightly different musical tools with which to express. For a worship record, Tides is incredibly innovative. The typical "Ooh, Ooh, Oohs" and rather predictable vocal melody lines and delay drenched guitar parts have been tossed aside. Instead, the band's worship leaders seem to be taking direction from 90s pop records and electronic dance music. Don't be alarmed; this sort of thing is done incredibly tastefully with Jenn Johnson on "I Can Feel You," and there's even a long fade out on this track making the song reminiscent of something in the realm of Celine Dion.

The electric guitar takes a back seat to keyboards on Tides, which for guitar lovers is somewhat of a letdown, but the dramatic step in a different direction is respectfully acknowledged. Synth and saxophone solos make appearances on a few tracks with simple guitar parts pushed further back in the mix. The first half of the record is upbeat with driving choruses, like on "Strong In Us" where Brian Johnson sings about how the same power that raised Christ from the dead is alive in us today. The downside with the first half of the record would be the occasional piercing synth sound that tends to distract.

Then, at about halfway through, the record takes a more contemplative shape with "I Can Feel You" and the Steffany Frizzell-fronted "Be Still." This is something that Bethel is better known for: their emphasis on long drawn out spontaneous worship, with freedom for creativity and expression to God, which the middle tracks on the record seem to be formatted for. With Bethel, the presence of God is tangible, and the warming touch of Jesus and other physical manifestations of the spirit of God are often mentioned in their songs. This element is perhaps what makes Bethel's music unique.

The two tracks on Tides that seem to embody the Bethel worship experience and seem to fully exhibit the passionate anointing that the church is known for are "Heaven's Song," sung by Jeremy Riddle, and "For the Cross," which features Brian and Jenn Johnson. Violins caress Riddle's track with a beautiful repetitive melody that underlays the chord progressions throughout before he launches into the chorus that sings of "elders falling down to worship." Finally, on "For the Cross," Jenn takes the song into an otherworldly space as she strains to sing in bone-chilling power and confidence the lines "hallelujah, it is finished, hallelujah, it is done." It is near impossible for a worship record to end with a more bold declaration of resolution. Bethel places a firm flag in the ground with Tides, reshaping and redefining again what is possible with a worship record.