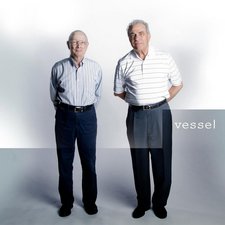 In 2011, Columbus based Piano Rock/Rap duo Twenty One Pilots took the Ohio music scene by storm with their second full-length release, Regional At Best, by combining powerful synth, beautiful piano parts, and clever, yet meaningful rhymes.

Finally by the end of 2012, Twenty One Pilots caught the attention of major record labels when they sold out the LC Pavilion in Columbus, Ohio. A local band selling out a venue as big as the LC left record labels asking, "What's going on in Ohio." Soon after, Twenty One Pilots announced that they had signed with label Fueled by Ramen. They then began production on their third full-length record, Vessel.

Not only does Vessel have a sweet album cover, featuring Tyler Joseph and Joshua Dun's grandfathers, it also features 6 re-vamped songs from the band's previous releases, as well as 6 brand new songs with the same brilliant rhymes and synth sounds Twenty One Pilots's cult fan base has come to know and love. The album starts of with powerful and sometimes poppy "Ode To Sleep," a fan favorite, mixing heavy bass and synth with smooth rhymes over top of the music; when the music finally fades, a slick bass lick moves the song into a pop mode. The opener is then followed by two radio-ready pop songs, titled "Holding On To You" (a previously recorded song) as well as "Migraine," which the band released on the Three Songs EP. "Holding On To You" gives us some powerful lyrics in the bridge, like "Lyrics that mean nothing, we were gifted with thought, is it time to move our feet to the introspective beat, it ain't the speakers that bump hearts, its our hearts that make the beat." This is Twenty One Pilots at their best showing where they stand, that their heart is in their music as it always has been. "Migraine" takes us through the thought that we are constantly battling ourselves, with lyrics like "Am I the only one I know, Waging the war behind my face, and above my throat?"

The album continues on with a ukelele-led song that front man Tyler Joseph wrote about for his mother, titled "House of Gold." The spoken word ballad and fan favorite "Car Radio" follows right behind. Then we hit the meat of the album with three brand new songs from the band--with the ever so catchy "Semi-Automatic," followed by the band's beautifully written "Screen." The song is an honest tribute to the glory of God, and how we can't hide our soul from Him. "There is a screen on my chest" is true in many forms; God can see right into our hearts. The bridge of the song comes around, and Tyler is singing "We're broken people, We're broken people." It's great to see young artists admitting that we as a human race are broken, and God is our only redemption; we can't hide from him.

Vessel continues on with the fun, quirky piano-driven "The Run and Go," followed by another new track, titled "Fake You Out." Keeping with the upbeat sense of the record, "Guns for Hands" comes next, another fan favorite from Regional At Best. The building techno/rock ballad "Trees" follows, which could easily be at any high school dance in America with its slow beginning and huge build at the end. Joshua Dun's drumming is at its finest at the end of this track.

Finally, the album closes with a beautiful ballad titled "Truce," which is very different from the rest of the album. "Truce" brings in a single piano and some nice falsetto from Tyler, making it the perfect way to end the record. All in all, for Twenty One Pilots's mainstream debut, they could not have picked a better group of songs. The only thing that keeps me from giving the record 5 stars is the fact that they re-used 6 songs from previous releases, making the album feel more like an EP rather than a full-length record to the band's loyal fan base. While this is unfortunate for the diehard fan, it's a blessing for the fans-to-be who have yet to hear the brilliance that is Twenty One Pilots, and the purity of the music they have previously released.

I have been following Twenty One Pilots ever since I saw them in a small coffee shop in Middletown, Ohio three years ago. Ever since then, they have won me over, and I joined the craze that is Twenty One Pilots. They are the inspiration for many local bands in Ohio, and I greatly look forward to their future releases. In the words of Tyler Joseph, "Power to the local dreamer."