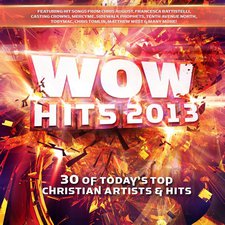 The WOW Hits albums are a great way to recap the best Christian hits of the current year of their release. They tend to have high points and low points, with this album being a prime example.

What tends to be annoying with these albums is that some of the songs feel too outdated to be considered "today's top... hits." The outdated songs on WOW Hits 2013 (as of late 2012 when it was released) are "Courageous," "Blessings," "I Lift My Hands," "Fall Apart," "Do Everything," "Someone Worth Dying For," "Lift Me Up," "Hold Me," "The Redeemer" and "The Light in Me," with some of these being VERY old.

Despite these flaws, there are some good things about this WOW Hits album. One pro is the selection of solid tracks that did make it on the album. Some examples of this are "10,000 Reasons (Bless the Lord)," The Hurt and the Healer," "Live Like That," "God's Not Dead," "Me Without You" and "Where I Belong."

There is also a bit of variety in the way of genres on this WOW Hits album (although more would be nice). Songs that showcase this are "One Day Too Late," "Make a Move," and "Feel It in Your Heart" (exclusively on the Deluxe Edition of WOW Hits 2013).

This is definitely not a bad collection, but there are some very obvious changes that could have been made to make it a better WOW Hits album.