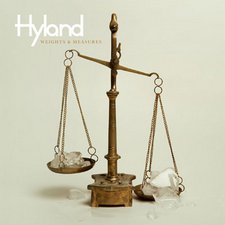 The Tooth & Nail Records family has been on a roll lately, signing new bands left and right. It's still somewhat early in 2011, but there are four T&N debuts scheduled for this year. I Am Empire has already released theirs, and later this year we'll hear debuts from Icon For Hire and Swimming With Dolphins. The fourth one (not chronologically) comes from a pop rock group called Hyland.

In addition to Weights and Measures being Hyland's first nationally-released record, it's also their first full-length one (they've released two independent EPs in the past few years). It seems like it would be a tall task to put out one album that contains one more song than your last two EPs combined, and Weights and Measures almost shows me that it was that way for Hyland. To put it a little more clearly, the album feels as if, instead of making an attempt at a full-length record, they looked at it as two EPs put together. That's not to say that that is definitely what they did, but the format of the album gives off that vibe. The reason I say that is that Hyland goes through the first few songs with upbeat pop punk, a la Run Kid Run, and then slows it down for a ballad. Then they take it back up for a few more songs, and then leave us with a couple more ballads. It's not entirely a bad thing, but in the end, it doesn't really leave a great lasting impression.

Now, there is certainly a good amount of talent to be found in Hyland. Their music is fun, and will surely find itself in the hands of many pop punk fans. The problem is that the band doesn't really have their own sound. If you can picture a cross between the respective sounds of Run Kid Run and Anberlin (with a heavier leaning toward the former), you know what to expect. They don't do a bad job conjuring up this sound; it's just the fact that their sound isn't their sound that brings Weights and Measures down. The lyrics don't do a whole lot to improve the situation, either. Now, on a high note, they're very positive, encouraging and, at times, worshipful. They know who they are, and they put it out there well. It's good to hear musicians being honest with themselves. It's a little difficult to give them points for depth or insightfulness, but they get points for the positivity.

In its heyday, Tooth & Nail Records was signing what seemed at the time to be the best of the best. The label offered great pop rock and punk bands that went on to create legacies, both in Christian and mainstream music. They gave a start to MxPx, Danielson, The Juliana Theory, The O.C. Supertones, plus more. Do I think that Hyland will be in a list like this in the future? Based on Weights & Measures, I would say no. It's not a bad album, and to be fair, it's only their first time with a full-length one, but it's just too generic to make a real impression. If they can find a sound that better defines who they are, instead of shadowing other bands, they can make a better album their second time around.

One of the latest additions to the Tooth & Nail family is Minnesota natives, Hyland. For their debut album, Weights and Measures, the band brings a balanced pop rock and worship sound to the table. Although the band's music may not strike many as overwhelmingly unique, Weights and Measures does have its moments with sound rock songs like "Jumping The Gun" and "Til Death." Hyland's rock edge has Anberlin leanings which climaxes with Stephen Christian's appearance in "The One That Got Away." On the other side of the coin, Hyland has a more thoughtful approach to their worship music. The lead single "This Love Is Free" and "Never" is fairly direct, but there is an alternative influence to much of their softer music. Except for a couple songs which revolve around girls and relationships, the songs on Weights and Measures are thoughtful and spiritually minded without ever approaching esoteric. From singing about their reliance on God on "Desperate Man" (inspired by their own personal experiences with their equipment being stolen), and God's forgiveness ("Never"), Hyland's messages are solid and relevant. Overall, Hyland's debut has very few mishaps, but they don't offer any groundbreaking material. Still, their first album indicates that they are a band to watch out for in the future. - Nathaniel Schexnayder, 5/1/11