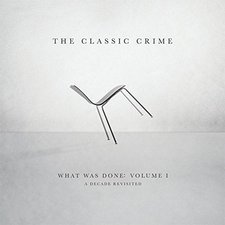 The Classic Crime
What Was Done, Vol. 1: A Decade Revisited

For The Classic Crime, 2014 marks their ten year anniversary from the band's interception. Since then, the group has consistently released alternative rock music, including three albums with Tooth & Nail Records and one independent full-length project funded on Kickstarter. Last year, the band returned to the crowd-funding site to create a celebration of the previous ten years, calling the project What Was Done, Vol. 1: A Decade Revisited.

Most of the project revisits songs from The Classic Crime's past albums and provides an acoustic take on them. Anyone wishing the band would focus on the efforts of their most recent discography may have to wait for Vol 2. The Silver Cord noticeably seems underserved as neither "Just A Man" or "Closer Than We Think" make an appearance. The Classic Crime's first album, Albatross, receives the largest volume of attention while only two songs are taken from 2012's Phoenix. This really isn't necessarily a problem because the new, acoustic versions of the older music reflect more careful workmanship than an average acoustic venture.

Although most of the ballads the band chose to tinker with don't seem to need a makeover (especially the acoustic version of the strong "Name" which sounds very similar to the original), the rockier tracks from Albatross sound the best in their updated form. "We All Look Elsewhere" has a strong cello presence, and it sounds more evenly paced than before. The guitar is the dominant instrument on the What Was Done, and it drives both "The Coldest Heart" and "Who Needs Air" to become highlights. The fun title track from Vagabonds still retains a punk-pop feel even in its acoustic form. Both "You And Me Both" and "Beautiful Darkside" are excellent takes on already stellar songs from Phoenix. "Selfish," a soft, emotional ballad, is the first of the brand new songs from the album, and the other, "Where Did You Go," has a haunting chorus. On the downside, "Headlights" and "The Fight" sound a bit too tacked on vs. the ten more interesting songs that came before.

What Was Done sounds less like an obligatory release to keep fans happy, and more like a studio album full of new tracks. A loose comparison could be made to Matt & Toby (the side project from Emery), because What Was Done is a great look into the softer facet of an accomplished rock band. The lyrical content shouldn't surprise anyone as the project mixes Classic Crime's usual style of well-written cynicism and hope with obvious spiritual connections. The well-executed acoustic rock music is the distinguishing quality of the album that could have been just a lazy effort. As it is, What Was Done is a great entry in The Classic Crime library that easily stands on its own.

The Classic Crime have been together as a band for ten years now, and for their anniversary, thanks to Kickstarter, the Seattle natives have given us a nice collection of songs from the past. Thankfully, it turned out so much better than any generic "greatest hits" compilation could have. The project was promised to be an acoustic album, but it is really so much more than that. The majority of the songs present on What Was Done, Vol. 1: A Decade Revisited are actually "revisited" versions. This means that band has gone back and recorded acoustic renditions with arrangements that differ from the originals. What's more is that there are also two new songs attached as bonus tracks. The first, "Selfish," is a version recorded live in the studio, whereas "Where Did You Go" is a beautiful acoustic cut recorded for this project. Their debut album, Albatross, dominates the set list with half of the twelve remaining tracks coming from that record. Their other three albums: The Silver Cord, Vagabonds, and Phoenix are all represented evenly at two tracks per. What Was Done honestly feels new even though a lot of the tunes are at least eight years old now. The guys put have together a collection of brilliantly recorded songs that should surpass most, if not all, expectations from fans. The tracks they selected are perfect for the acoustic treatment and the arrangements are spot on. For this reviewer, "Who Needs Air" takes the cake as the best revisit present. Enjoy the acoustic goodness of this new record and here's to another ten years for The Classic Crime. - Review date: 10/24/14, Michael Weaver

After a Kickstarter campaign that was fully funded in less than 5 hours, a new studio built in Matt's garage, and a long process of recording, we are finally presented with What Was Done: Volume 1--a stirring assortment of re-imagined Classic Crime songs. WWD:V1 keeps you completely engaged and captivated from the reflective opener, "All The Memories," to the thought-provoking closer "Where Did You Go?" Because of the more stripped down musical approach, Matt's strong voice and poignant songwriting are front and center on this album. Highlights include the haunting "We All Look Elsewhere," the emotional "Who Needs Air?" and the urgent "You and Me Both," which all sound better than the originals. The only songs holding this album back are "The Fight" and the new "Selfish." The slower-paced version of "The Fight" may have intended to come across as being creative, but instead it just sounds melodramatic. The live sound of "Selfish" does not fit with the rest of the album and can't hold a candle to the other songs present--musically or lyrically. Despite these minor blemishes, WWD:V1 is a well-crafted album that will surely appease current fans and attract new ones. - 10/27/14, Christopher Smith of Jesusfreakhideout.com