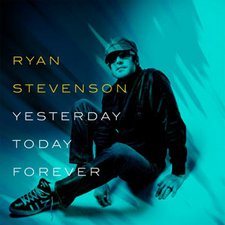 Worship music is a fickle thing. It's probably the hardest genre to nail for any artist, mostly because of its potentially recyclable nature and how saturated the market is with poor to barely-acceptable attempts at worship projects. With this in mind, it takes quite a bit these days to make a truly remarkable worship record, but BEC Recordings' newest addition to its roster, Ryan Stevenson, is trying his hand at the game with the electronically-infused Yesterday Today Forever EP.

As can be expected from electronic music, digitized voice effects, synths galore and drum loops are all the norm on Yesterday Today Forever EP. It's hard to argue that Stevenson doesn't stick out from the rest of his compatriots of BEC, as no one else is really carrying the same sound on his label. Stevenson's got the talent to pen catchy and listenable songs, and this EP is proof. The title track and "No One Ever Cared" shamelessly nails the irresistible beats down, and the ballads "Let the Praises Rise" and "In the Sun" showcase Stevenson's ability to use minimal effects to their advantage. With only several songs to show, he attempts to include variety to his credit.

The main issue with the project overall, however, is that the electronic effects in play, while done reasonably well, aren't enough to make the EP anything more than average. In some ways, the title track would be a run-of-the-mill worship song if it wasn't for the overpowering synths, mostly because of how basic the lyrics are ("Yesterday, today, forever, all may change but You will never, glory to Your name, glory to Your name/all that is within me longs to touch Your heart with this love song, glory to Your name, glory to Your name"). In short, the electronic effects don't improve the unremarkably-written lyrics attached to the songs, and this is a constant problem on all the tracks presented here. "We Got the Light" is an especially curious case, as well, mostly because there are two versions of the track on the EP, one being a "radio mix." The songs are noticeably different, with the radio mix being a little less produced, but it feels more extraneous to the EP than anything else; a sixth separate track would have been preferable over two versions of another.

The concept of electronic worship is nothing new, either. Listeners could definitely do far worse when it comes to the hybrid (with the likes of DreamLab, etc.), but Charmaine, Danyew, and David Crowder*Band (specifically their last record) all feel like really tough acts to follow, especially since their songwriting is stronger and they don't necessarily purely rely on laptops and computerized sounds to carry their projects. Though parts on "Let the Praises Rise" include acoustic guitar strums and "No One Ever Cared" features an average electric guitar solo, it's all about the same effect in the end. It's tempting to say Stevenson's sound would be better tested on a full record to see the depths of his abilities, but Danyew's self-titled EP, one of the best projects of 2009, seems to disprove that logic with every track having a special trait. Stevenson's short set just doesn't stand out in any significant way, making this release not nearly as interesting as it could be.

Ryan Stevenson is obviously trying to do something different with the worship genre with Yesterday Today Forever EP, but it takes something more than synths and auto-tune to leave a memorable mark. It'll be once Stevenson breaks out of his box and finds a defining factor beyond his instrumentation that he'll release something spectacular in the worship field, but until then, listeners still have better options available in the electronic genre.