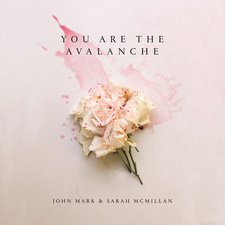 John Mark and Sarah McMillan
You Are The Avalanche EP


John Mark McMillan has grown into one of the most recognizable names in Christian Music, and for good reason; he is an artist who both makes great art and makes worship music. Coming off a string of ever-increasingly successful and exemplary albums (plus an impressive "alternate interpretations" project, titled The Borderland Sessions), and with an ambitious live project releasing this fall, it seems fitting for McMillan to attempt a project like You Are The Avalanche. Not only is it a tantalizing project in that John Mark's wife Sarah receives co-top billing, or that it is an EP that seems very much like a precursor to a future duet project, like All Sons & Daughters or Copperlilly, but it is arguably the first McMillan project that seems directly geared towards a corporate worship setting (something he made a point to me when I interviewed him last year that he did not usually set out to do).

This EP is just about everything we could hope from a short worship EP; the five song, twenty-five minute length is perfect, with none of the songs dragging on too long or ending too abruptly, and with a very high replayability factor. In fact, after coming off such an ambitious and creative project as Borderland, the first impression I had of songs like "The Goodness" and "King Of My Heart" was that they were rather ordinary worship fodder, but repeated listens revealed those songs to be treasures that reach far beyond the ordinary. Instrumentally, You Are The Avalanche comes from a similar vein as Borderland; the EP is heavily percussion-led (and it is seriously some of the best percussion one is likely to hear in the realm of Christian worship) with rich textures being added by echoing guitars, choral vocals, piano, and even a dulcimer. But it did not take me many listens to realize the treasure of the song "Heart Won't Stop," the EP's unequivocal highlight ("I could lay my head in Sheol / I could make my bed at the bottom of the darkness deep, oh / But there is not a place I could escape you / Your heart won't stop coming after me").

My only real complaint is more along the line of unmet hopes/expectations than anything. On only one of this EP's five songs ("King Of My Heart") does both artists share lead vocals; in the other four, either one or the other leads exclusively. With this structure, You Are The Avalanche has more the feeling of a sampler than a fully cohesive project, as we are barely given a taste of what the husband and wife are capable of as a duet. Then again, while I don't know if there are plans for the husband-and-wife duo to do anything more together in the future, perhaps this was only meant to give a taste in order to see if the duet would receive a warm response and a demand for more? If that is the case, I so demand!

With five excellent potential additions to a Sunday morning lineup, all of which are very well-done and better in quality than most worship music, John Mark & Sarah McMillan have made a very positive impression, both displaying the talent they have, and leaving plenty of room for growth to blow us away in the future. Hopefully in between the ever-increasingly-impressive highlights of his solo career, John Mark can be joined by his wife more often in the future.