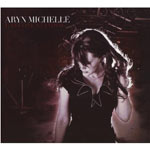 A self-taught and self-motivated musician from the middle of Texas, Aryn Michelle has been determined to make a name for herself in the music industry. She debuted in the industry when she released Lockless Heart in 2009 while still working toward a degree from Berklee College of Music in Boston, Massachusetts. The next couple of years were kind to her, as she received lots of recognition for her music, including being a finalist in several different "jingle-writing" competitions. Michelle and her band soon began working on a new full-length album, and released it in October of 2011. The album is called Last One Standing and showcases Michelle's knack for writing poppy songs that bear a rock/alternative flavor. Last One Standing is pretty diverse, musically. At times, she could easily be described as a softer Evanescence (such as album opener "Last One Standing"), while other instances feel more like The Hawk In Paris (such as "Strange Fire"). Most of the album is pretty good, with the worst of the problems being rather minor in the grand scheme of things. A few instances tend to drag a little (the chorus of "Kindness" is cool, but it can get hard to listen to after a while), and other times the production is noticeably in need of some work. Other than these, Last One Standing isn't a bad album at all. Christian pop and rock fans who don't mind some slower material in their ears every once in a while may enjoy Aryn Michelle's latest.

Last One Standing Sampler by arynmichelle