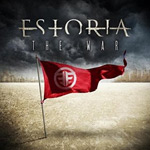 Coming together from different parts of the country as well as different genres of music, the four members of Estoria have blended all of their respective styles together to form their second EP, the Travis Wyrick-produced The War. With a combination of pop punk, rap, and modern rock, Estoria can almost be described as a female-fronted Pillar-meets-Linkin Park. Vocally, Meagan Reeves is vaguely reminiscent of Fireflight's Dawn Michele in "Battle Cry" and "Beauty Meets The Beast," and they sound especially at home as the band follows suit in "From Darkness." Her vocals are in need of a little polishing, but she can hold her own well enough against other similarly-styled vocalists. The rapping, on the other hand, is definitely some of the sloppiest I've heard. While I wouldn't say the raps are entirely out of place here, rapper Raymond Gilstrap does sound rather out of his element when he picks up the mic. Rapping in a rock song is obviously not a new concept; if Estoria wishes to impress anyone with this piece of their puzzle, though, a stronger presence is a must. The band's overall sound is a bit on the lackluster side, but they do seem to hit a sweet spot in the EP's closing track, "Warrior." The song itself doesn't stick out, but the chorus is catchy and a good reminder that, in Christ, we are warriors and conquerors (more than conquerors, at that). The War is sure to be a crowd-pleaser, and Estoria will fit quite nicely into many fans' music libraries, but I'd be more interested to hear what they can do after fine-tuning some of the rough patches. - Review date: 12/22/14, written by Scott Fryberger of Jesusfreakhideout.com