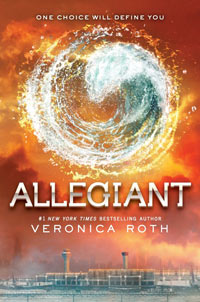 Since 2011, youth across the country have been fascinated and enthralled with Veronica Roth's bestselling series, Divergent. In a world full of YA fiction ranging from questionable to downright preachy, Roth brings new elements to the table: a lovely balance of realism and enveloping storytelling one can't help but fall in love with.

The story begins with Tris and Four making discoveries about their city that no one ever even had an inkling about. The two warring sides clash immediately, and the ensuing danger leaves Tris and Four with critical decisions to make. Decisions about the massive revelations and the impending war inside the city's fence threaten to throw off their entire existence, but then dire circumstances force them to go outside the fence in search of what lies beyond.

Veronica Roth moves her plot along nicely. So nicely, in fact, that I personally mourn the loss of skill and talent in today's YA market-or the market in general. Roth carries about herself a presence of knowledge: knowledge of her world, her characters, her own identity and skill level. Each tier of certainty shines through until I forgot I was reading a work of fiction. The world and plot build up organically, like a mental pop-up book. This being the end of a trilogy, part of me was incredibly hesitant to get to the end. The vast majority of series suffer from Bad Ending Syndrome (BES), where, for reasons unknown, the author throws anything they can together to pull all the loose threads into a cord that quickly frays and reveals the haste-waste. Roth came around with the origins of her world without missing a beat, and by the end of the book, I felt whole and complete, like I had missed nothing and everything had fallen together. That being said, parts in the middle did lag a bit; plot-wise or not, it could have been tightened up to make things progress more quickly.

From the very first book, the biggest facet in Roth's distinct style is her use of real characters. Today's market--no matter the style, genre, age group, or whatever--suffers from an overabundance of perfect people, surface conflicts, and unbelievable situations. For instance: a beautiful, kind, talented girl who doesn't think herself beautiful, kind, or talented falls in love with a mysterious, handsome, secretly-kind boy who tells her otherwise, and they proceed to solve problems come the turn of a page and live happily ever after. Roth destroys this archetype. Her characters are so real, you could expect to walk into any store and see them there. They are flawed, average-looking, talented in unique ways, and always searching for something to make them whole. Within the series, Roth touches on what that Thing is: God.

Veronica Roth has never hidden the fact that she's a Christian from any of her fans. What makes her so relatable and believable is that she's a Christian who lives as Christ did: hanging with the outcasts, never preaching directly in someone's face because she thinks they need to hear it or they're going to Hell, always letting people discover for themselves how God is speaking to them through her work. This infusion of reality and faith hits the spirit hard, and this is exactly what Christians need to start doing. We need to set a standard that's far from rose-colored stained glass and be real with not only ourselves and everyone around us, but with God Himself. Roth has begun a precedent I respect highly and strive to follow myself. She has my utmost admiration.

Allegiant has zero blasphemy when it comes to cursing; only scattered cusses dot the pages, and characters never use the "f-word". The only sensuality to worry about is Tris kissing Four. One character drinks alcohol due to grief over lost friends, but nothing is promoted or glorified. The only thing prevalent in Allegiant is violence; Roth never glorifies or shows explicit pictures of the violence enacted. Guns, knives, fists, and bombs are used as weapons.

Though the Divergent series has closed out, I find myself incredibly satisfied by Roth's method. Tris' world will forever live in my heart, and I can only say a thank-you to Veronica Roth for letting the story tell itself instead of dictating what was to happen. The end is already written. Writers simply have to listen to find out what that ending is--no matter the heart-wrenching costs.